THE THRILL OF THE PLOT 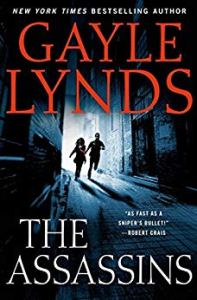 I write romantic suspense, a subgenre of romance that can easily spill into thriller territory, and some reviewers have described my books as romantic thrillers. Gayle’s presentation hit all the sweet spots in an approach that made me think about plotting in a new way. Regarding plotting, fiction writers generally fall somewhere along a continuum between plotting an entire book before writing the pages and diving into a new project with only a glimmer of an idea and writing “by the seat of their pants.” My style is more toward the plotting end, but only for the major conflicts and twists as well as character studies. You might say I’m a “plotser,” a hybrid between plotter and “pantser.”

Gayle covered several important points about plotting and story plots, but one in particular sparked my imagination and had me analyzing my own books. In her words, “Your villain drives the plot…until the end. And then the hero and the heroine drive it right back.” It’s the villain’s role to challenge the hero every step of the way, but toward the end, in the third act, both hero and villain are doing the acting, being the hunters. You see, it’s not just stage plays that are structured in three acts. Commercial fiction and movies that are well plotted should also play out in three acts, the ancient Greek Aristotle’s beginning, middle, and end. I asked myself if this was how I’ve structured my plots, even though I had never looked at plotting this way.

My current project, Hidden Obsession, to be released later this summer or early fall, is the sequel to an earlier standalone, Primal Obsession.  I analyzed the earlier novel first. In Primal Obsession, Annie Wylde, an investigative reporter, goes on a canoe and camping trip in northern Maine to fulfill a promise to her friend who was murdered by a serial killer the media calls the Hunter. Annie plans to study her notes on the killer and try to understand him by experiencing the kind of wilderness where he kills his victims. Sam Kincaid, a former Major League player, is the Maine Guide leading the trip.

Both have their goals and issues, and they banter and flirt until, a little after halfway in the story, it becomes clear that the various “accidents” plaguing the expedition mean that the Hunter has followed them or is one of the campers. So far, it’s the villain driving the plot, challenging the hero and heroine and complicating matters. About 75% through the story, in act three (yay), Sam and Annie decide to stop running away from the Hunter and go after him. And now it’s the hero and heroine driving the plot.

Hidden Obsession is not a wilderness story, but is set on a Maine peninsula. Sheri Harte, a freelance writer, returns reluctantly to her home town of Dragon Harbor to ghostwrite the memoir of an elderly woman. I said reluctantly because a tragedy in her past has deterred her for many years. When she arrives, she learns a man has been killed on the nearby rocky cliffs, as in this image. Of course it’s a foggy day on the coast of Maine. Justin Wylde

is a Maine state detective and the brother of Annie Wylde in Primal Obsession. Justin was also the detective in that book. In Maine, state detectives investigate major crimes such as murder in all locations except the two largest cities. In the story, the villain systematically attacks some village residents, and in more than one case, murders people. This book is less of a romantic thriller and more of a romantic mystery, a whodunit with a love story.

While Justin investigates and Sheri snoops along with being a target of the bad guy, the villain continues acting under their radar. Until about 85% into the story, again, in act three, when Justin and his partner have enough evidence to confront the villain. Then, as in Primal Obsession, the tables are turned—with a few more twists to come. I have no cover yet for Hidden Obsession, but enjoy this photo of a man who could be Justin Wylde.

I’ve been purposefully vague about some of the events in both books and especially about the villains so as not to include spoilers in case some of you want to pick up one or both books. I’m confident my other books are similarly structured, although I haven’t analyzed them to the same detail as these two.

I will leave you with another pithy insight from Gayle Lynds. “While ‘story’ feeds the mind and heart, ‘plot’ is the engine that dramatizes it.”

Susan Vaughan loves writing romantic suspense because it throws the hero and heroine together under extraordinary circumstances and pits them against a clever villain. Her books have won the Golden Leaf, More Than Magic, and Write Touch Readers’ Award and been a finalist for the Booksellers’ Best and Daphne du Maurier awards. A former teacher, she’s a West Virginia native, but she and her husband have lived in the Mid-Coast area of Maine for many years. Her latest release is HIDDEN OBSESSISON, the follow-up to PRIMAL OBSESSION, available as digital or in print on Amazon. Find her at www.susanvaughan.com or on Facebook as Susan H. Vaughan or on Twitter @SHVaughan.
View all posts by susanvaughan →
This entry was posted in Susan's posts and tagged crime writing, Gayle Lynds, Maine, Maine Crime Writers, mystery writers, mystery writing, Primal Obsession, Susan Vaughan, The Assassins. Bookmark the permalink.

7 Responses to THE THRILL OF THE PLOT