I’ve just finished cutting the grass on my .85 acre back yard. It was an exciting experience in that I was swarmed by our state bird, the Simulium trifasciatum–better known as the blackfly. Experts say that blackfly season runs from Mother’s Day until Father’s Day, after which things dry out and warm up enough to reduce their population. However, May of this year was extremely wet up here in the northern part of The County and rather than being near the end of the season it seems we are at peak.

It takes me just over two hours to cut my backyard with my 46″ lawn tractor; that means for two hours I am the main course at a blackfly picnic. I count 16 bites on my arms (who knows how many are on my head where I can’t see them even though I wore a hat (for years I was not one to wear headgear but now the foliage has gotten so sparse that some sort of cover is needed). 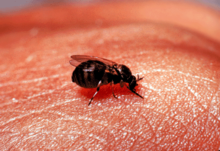 Virginia M. Wright got it correct in her article in Downeast Magazine entitled The Blackfly Survival Guide (https://downeast.com/blackfly-survival-guide/).  She wrote: We have met the enemy, and she is the blackfly. She is a mindless, merciless eating machine, and what she wants to eat is you. What she lacks in physical heft is more than offset by her numbers. She and her sisters — for the biters are all female — attack in ferocious, ruthless, maddening swarms. They will turn you into a bloody, itchy, swollen mess if they don’t drive you crazy first. Based upon Ms. Wright, I’m pretty certain that my home is situated in the middle of a colony of Amazon Black Flies, there is not a single male among them.

It makes one feel as if God has a grudge against us. After subjecting us to eight months of winter every year, the blackfly Plague settles in for one to two of our four non-winter months. Did I mention that the height of Blackfly season is that brief period when my grass grows so fast that I have to cut it every three or four days?

To be fair, Ms. Wright lists four things about the blackfly that are beneficial:

1. A healthy blackfly population is a sign of good water quality. Maine had few blackflies in the 1960s when its rivers were heavily polluted.

I would never have thought that a clean water supply could lead to major blood-loss!

2. Maine blackflies do not carry diseases. One of the good things about living in a cold climate is you short-circuit disease-vectoring by insects.

I take umbrage with this: I consider hemorrhaging to death from a thousand small red bites to be a major disease.

3. Blackflies are food for creatures we like. Trout eat their larvae. Birds and bats eat the adult flies.

Really? Personally I’ve never met a bat that I liked–something about them carrying rabies–but then I was not aware that they ate blackflies. Maybe I’ll revisit this.

4. Blackflies can be monetized for a good cause. Just ask the Maine Blackfly Breeder’s Association (official greeting: May the Swarm Be With You), a Machias charity organization that raises money through the sale of gear featuring a large blackfly and the words “Blackflies: Defenders of the Wilderness.”

You got to be shi–ing me!

I’m currently plotting out my next mystery where my antagonist murders his target by releasing a few thousand starving blackflies into the room while the victim is sleeping–all windows are shut and door is locked from the outside. Well time for me to go, I have to take the trimmer around the places where the mower blades won’t reach . . . or as the blackflies say “Here comes the second course!”

Vaughn C. Hardacker has completed five novels and numerous short stories. He is a member of the New England Chapter of the Mystery Writers of America and the International Thriller writers. Three times he has been a finalist in the Maine Literary Awards Crime Fiction category, SNIPER, in 2015, THE FISHERMAN in 2016, and WENDIGO for the 2018 award. The second installment of his Ed Traynor series, MY BROTHER'S KEEPER was released in July 2019 and is available through all major booksellers. A signed copy can be ordered directly from Vaughn (vhardacker@gmail.com). THE EXCHANGE his next crime/thriller will be released on September 4, 2020. He is a veteran of the U. S. Marines and served in Vietnam. He holds degrees from Northern Maine Technical College, the University of Maine and Southern New Hampshire University. He lives in Stockholm, Maine.
View all posts by Vaughn C. Hardacker →
This entry was posted in A Day In..., Vaughn's Posts and tagged blackflies, Maine. Bookmark the permalink.