Sandra Neily here: With apologies for crashing into this lovely fall weather with anything sobering (this is not about covid), but maybe after the hottest summer on record in Maine, we can shake loose our brains for something we can do something about.

I have been on a bit of a mission. Both my novels attempt to seduce readers into a compelling murder mystery, into the magic of woods, and also into what threatens to murder those woods. (One murder mystery inside another murder mystery.)

In Maine, this forest is the last temperate forest of its size and kind in the northern hemisphere. Rich in all kinds of plant and animal diversity and essential water resources, and the last of its kind: chunking it up with industrial development is, well, just stupid. 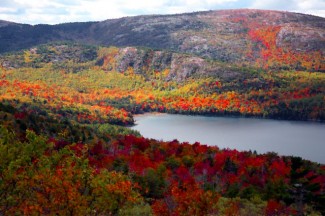 There, I’ve said it. Stupid.

And now if you’ll read on, I’ll make the case. (Or you can acquire a copy of Deadly Turn and get seduced into finding out what I will spell out more coldly in this post.

Deadly Turn is about wind power where it might not belong, but all the issues in it could also be about CMP’s proposed energy corridor where more energy has been spent putting millions into advertising it, than actually proving the case it will reduce our carbon footprint.

Here’s the best info on it.…and info on What You Can Do. (Natural Resources of Maine webinar). And if you like trout or just rivers and streams and ponds, listen to Trout Unlimited’s Jeff Reardon talk about how 300 industrial, wide-road stream crossings in undeveloped woods (many on public land bought with our tax dollars) is, well, pretty stupid.

First a quote from Deadly Turn to set up the Trees Beat Turbines issue.

Kate’s face brightened. “There’s tons of calculations in forestry. It’s not just boys with axes any more. Folks crunching numbers are all over the place analyzing the forest’s outputs and versatility. I’m headed toward the new stuff. My advisor teaches Climate and Carbon Dynamics and even though I’m not that far along in the program, he lets me audit that class.”

“Yup. I am. Your idea about how Maine should appreciate what it has—tons of trees rather than putting industrial energy in remote locations? Well, it didn’t look like you got beyond the public relations thing. It looked like you were working the spin part, but you never got to the math.” She grinned a very wide grin that quickly disappeared. “I’ve got the math. The proof. And most of my notes were in the pack that got stolen.”

The damselflies were back, this time hooked up in mid-air to mate right in front of us. Kate ignored them. “The math might disappoint some environmental organizations who thought wind power was a climate-change answer for us here. It’s weird. I can run computer models based on real field research. I can show how growing Maine trees and leaving them longer on the land before they’re harvested pulls more carbon from the air than any other carbon reduction strategy we could go for.”

I attended a Wind and Wildlife Conference, and we often met under the turbines.

She looked at me, eyebrows raised in surprise. “Weird they don’t do their homework. The green groups. They claim that wind power closes down fossil fuel plants. No way. Those plants need to stay on-line to produce power when the turbines are down or when there’s too little or too much wind. Every time they say wind will power so many homes, it’s theoretical bullshit. Wind can’t power a home twenty-four hours a day. Impossible. Would be like brown-outs in third-world places that only have one crummy power source that goes down all the time.”

I was afraid that if I jumped up and hugged her, the moment where she’d gone far beyond anything I’d imagined would end badly.

(And here’s my plain vanilla mission statement that defines the Trees Beat Turbines case. All the carbon facts I use come from energy experts. After reading it, you might understand why I tiptoed in with a novel instead of …. plain vanilla anything.)

HOW ABOUT SAYING “YES” TO MAINE’S MOST NUMEROUS ASSET?

A 1% change in carbon storage from our Maine forest (either up or down) equals 3 years of carbon output of the entire state of Maine.  (The Nature Conservancy)

The Rapid Decline Of The Natural World Is A Crisis Even Bigger Than Climate Change. A three-year UN-backed study from the Intergovernmental Science-Policy Platform on Biodiversity and Ecosystem Services has “grim implications …”

What if Maine could create the largest carbon reduction program in the country? With over 17 million acres of trees, we are the most forested state, and we have more than enough forestry expertise to figure out how to increase our carbon storage. 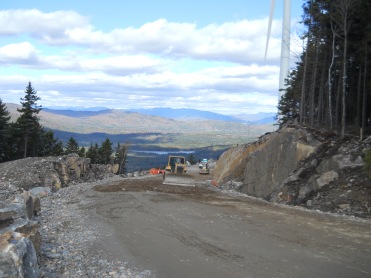 We might create a “YES” moment that avoids the “NO” now defining many of our forest conservation efforts as we resist forest-destroying initiatives.

Why aren’t we talking about Maine forest assets that could really assist carbon reduction efforts? Why are we industrializing the woods? (Blowing up mountains for industrial wind that delivers power less than 32% of the time or building a CMP corridor in forests that should never host transforming development?

At a 2007 carbon conference (when I worked for UMO’s “Forest Bioproducts Research Initiative”) Seven Islands Land Company’s manager said, “Why don’t you just pay us to keep trees longer on the land? That would do it.”

He was suggesting that we find a way to incentivize landowners to leave trees longer before harvest.

Since that time, the Appalachian Mountain Club and The Nature Conservancy (and other nonprofits) have successfully researched and executed carbon exchange programs based on Maine’s forest carbon reduction potential. Their research clarifies carbon sequestration and negotiation values for various tree species.

When I ask why this issue is not discussed, I hear there’s “no money” to incentivize land owners. That might be cart before the horse thinking. If Maine (and other forested states) can find a way to increase forest health and retain intact woodlands even as we make a carbon reduction contribution—money to fund that kind of innovation will follow.

DOING CARBON THE MAINE WAY could be a significant win-win effort. Currently both the CMP transmission corridor and industrial wind power create winners and losers and needless controversy.

What if we didn’t pit tourism communities that need intact resources to maintain their brand against those who plan to profit from industrializing Maine’s forests?

What if we didn’t need to pit one green goal (carbon reduction) against another green goal (forest conservation in the face of fragmentation threats)?

What if we could actually rejuvenate northern forest lands and wildlife habitat by leaving some trees on the land longer?

What a powerful way to grow Maine’s reputation and brand, nationally and internationally. We could make progress on the world’s two most serious environmental issues at the same time: climate change and loss of the natural world. (These crises are happening at the same time; they are connected.)

“The Rapid Decline of the Natural World Is A Crisis Bigger Than Climate Change.” A “three-year UN-backed study from the Intergovernmental Science-Policy Platform On Biodiversity and Ecosystem Services has grim implications …”

It is true that many corporate-owned forests are now so heavily cut (barely 2% in mature growth here in Maine), that normal carbon exchange programs on these lands could not essentially be a total model at this time. But the research underpinning the work AMC and TNC have done on carbon storage of Maine trees should give us what we need to create a state-wide, carbon storage program. 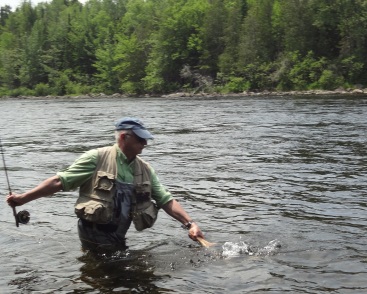 … a Maine program that will pull more carbon from the atmosphere than transmission lines to MA or the 300+ miles of industrial wind development authorized for our high elevation forests.

Developing high elevation lands and roading unfragmented forests to send power to New England states that have green portfolio laws requiring them to buy power anywhere they can find it, seems like a poor Maine solution when we have carbon-eating trees.

Sandy’s novel “Deadly Trespass, A Mystery in Maine,” was a finalist in the Maine Literary Awards, a recipient of a Mystery Writers of America national award, and a national finalist in the Women’s Fiction Writers Association “Rising Star” contest. Her second Mystery in Maine novel, “Deadly Turn” is now in Sherman’s Books and on Amazon in Kindle and paperback. She lives in the Maine woods and says she’d rather be “fly fishing, skiing remote trails, paddling near loons, or just generally out there.” Find more info on her website.

Sandy’s novel “Deadly Trespass” received a Mystery Writers of America award, was named a national finalist in the Women’s Fiction Writers Association “Rising Star” contest, a finalist in the Mslexia international novel competition, a runner- up in Maine’s Joy of the Pen competition, and recently, an international SPR fiction finalist. Sandy lives in the woods of Maine and says she’d rather be “fly fishing cold streams, skiing remote trails, paddling near loons, or just generally out there—unless I’m sharing vanishing worlds with my readers. "
View all posts by Sandra Neily →
This entry was posted in Sandra's Posts, Uncategorized and tagged crime writing, Maine, Maine Crime Writers, mystery writers, Sandra Neily. Bookmark the permalink.

3 Responses to It’s Really Ok to Call Something Stupid