Susan Vaughan here. I’m not what anyone who knows me would call spontaneous. I like things planned, I like to plan, but I can adapt when events don’t go as planned. Striking out with no particular goal or direction in mind shifts my pulse up a notch. Or two. So when my husband the Car Guy declared we should go on a road trip for a couple of weeks, with only the vaguest notion of “heading south,” first my pulse did that shift and then my stomach clenched. “But where?” I asked, and “how far?” He responded that after a week of heading south, we’d turn around and head back home to Maine. My mind whirled with questions—where would we stay and how far would we drive each day and how would we know what to see and do in various places. He brushed off my concerns with a “we’ll figure it out as we go.” (Which meant I would figure it out as we went.) Two weeks had to be our limit because of our senior dog, who would have to board. 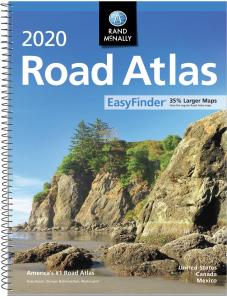 After some back and forth, I agreed on the road trip but had stipulations. One, I would not stay in any dives. Two, we’d try for hotels with breakfast included. And three, we would decide each day how far we could go so I could start finding a hotel by early afternoon. I began perusing a road atlas to figure out a general (dare I say it?) plan for “heading south.” My finger moved along Interstate highways through Connecticut, New York, and Pennsylvania, and landed on—Gettysburg!

I knew I had him. Car Guy is also a history buff. Neither of us had ever been there. Yay, our first major destination. Not really a plan, I told him, because who knew where we’d stop between here and there. Then he mused that it would be nice if we could get to Nashville, if it wasn’t too far south. There, I felt much better knowing we weren’t just heading out blindly. And I had places to research. Planner’s heaven. (And yes, for my books, I’m also a plotter.) So on October 15, we packed up the RAV4 with suitcases, various layers of jackets, maps, the GPS, my little Acer netbook, and a cooler and headed south.

After a slow, rainy trip and two overnight stops (success with phone apps and GPS directions finding decent hotels), we reached Gettysburg in sunshine. We walked around the historic downtown and had a delicious early dinner at One Lincoln on Lincoln Square.

The next day, armed with a map from the visitor center at Gettysburg National Military Park, we drove and walked various parts of the battlefield.  Tomes have been written about

the Battle of Gettysburg, but I’ll share the tidbits that have stuck with me from our visit. First some background for those of you, like me, who remember little from long-ago history classes about the importance and events of that 1863 struggle. Robert E. Lee’s Army of Northern Virginia, emboldened by an earlier battle victory, marched north. They were followed closely by the Union Army, and the two met at Gettysburg, by chance. On July 1 through 3, the Union Army commanded by George Meade and the Confederates fought near the town on farms and hillsides.

July 3 brought the fateful Confederate attack known as Pickett’s Charge. Cavalry and foot soldiers marched across an expanse of fields toward the Union Army hunkered down on a

hill near a copse of trees, which is still on that knoll today. That attack is known as The High Water Mark because it marked the greatest advance north of Confederate forces . The attack was driven back and, in the span of one hour, cost Lee 5000 lives. The fields were soaked with the blood of men and horses.

The Battle of Gettysburg was essentially over, and the loss turned the tide of the war. Every state participating has a monument, and smaller memorials to individual soldiers or skirmishes stand in every cornfield. Yes, those fields are still farmed. If you look in the background of this photo, you can see a small memorial and a cannon. 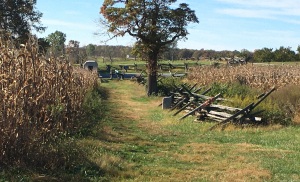 Toward the end of our day, we climbed Little Round Top. On that hill on July 2, Joshua Chamberlain’s 20th Maine Regiment defended the brigade’s left flank. 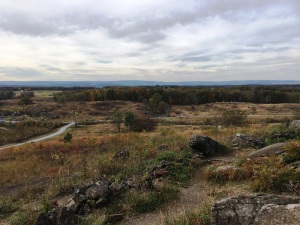 View from Little Round Top

At the top of the hill we found the Maine monument and a plaque commemorating the successful defense. Notice the coins on the monument’s base. A Vietnam veteran who placed a penny there explained to me it was a sign of respect, showing you’d visited. 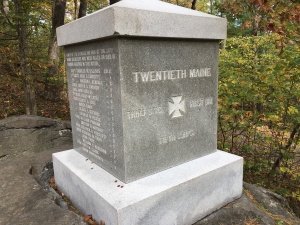 We finished the afternoon at the Soldiers’ National Cemetery, very near the battlefield. The Gettysburg Address was Abraham Lincoln’s speech to dedicate this burial ground. The cemetery is immense, with memorials created by family members of the deceased soldiers as well as a vast field of unknown soldiers. Stone markers identified each state’s section of simple graves for hundreds of men. I found the one for my home state of West Virginia and this one for Maine. 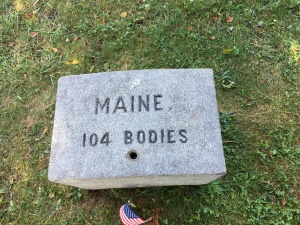 The scope and ferocity of what we saw and learned that day sobered us both and more than once brought me to tears. Although the Civil War tore the country apart, its conclusion preserved the Union, for which I am profoundly grateful.

The next day we continued south. In case you’re wondering, yes, we made it to Nashville. We saw a show at the Grand Ole Opry, walked the so-called Music Row (Broadway, actually ), and visited the Country Music Hall of Fame. It was a great trip, but I’m happy to be home in Maine.

Finally, a word about Thread and Buried, by our dear friend and colleague Lea Wait. Today, November 26, is the release date for her final book. This link to Kensington Publishing will connect you to all the major booksellers for both the digital and print versions. https://www.kensingtonbooks.com/book.aspx/39279 Or you can purchase this book from your favorite independent bookstore and request that your local library order copies. If you want to know more about Lea and all her books, visit her Web page at http://www.LeaWait.com.

Susan Vaughan loves writing romantic suspense because it throws the hero and heroine together under extraordinary circumstances and pits them against a clever villain. Her books have won the Golden Leaf, More Than Magic, and Write Touch Readers’ Award and been a finalist for the Booksellers’ Best and Daphne du Maurier awards. A former teacher, she’s a West Virginia native, but she and her husband have lived in the Mid-Coast area of Maine for many years. Her latest release is HIDDEN OBSESSISON, the follow-up to PRIMAL OBSESSION, available as digital or in print on Amazon. Find her at www.susanvaughan.com or on Facebook as Susan H. Vaughan or on Twitter @SHVaughan.
View all posts by susanvaughan →
This entry was posted in Susan's posts and tagged gettysburg, gettysburg address, Lea Wait, Maine, road trip, Susan Vaughan, travel. Bookmark the permalink.