Posted on November 7, 2019 by bereksennebec

John Clark in a holding pattern with the rest of the family, awaiting the arrival of Reid James Lozefski, our first grandson. Ten years ago, I got so weirded out after removing 34 deer ticks while in the woods at Sennebec Hill Farm, I stopped hunting after having done so since I was nine. I even sold some of my guns, my tree stand, buck grunt, knife and hunting vest before we moved to Waterville.

View of the orchard from the house in winter.

Dreams are a strange phenomenon. In the past few years, most of mine have been vivid, seemingly generated by the wayback machine in my head, and have been easy to remember the next morning, something that amazes Beth as she seldom remembers any part of hers. Hunting dreams, especially on the family farm, have increased in both frequency and intensity. Given that at 71, a lifetime license for hunting, fishing and archery would only set me back $8.00, the resistance to going back into the woods decreased markedly. When I downloaded the application form, I noticed that in order to get mine, I needed an old license or proof of a hunter safety course. What are the chances of still having an old license after not buying one for a decade, not to mention how much we downsized before moving? Still, it was worth going through my filing cabinet just in case. Imagine my surprise when I found one from 1983 when we lived in Chelsea. I had saved it because I purchased an Atlantic salmon stamp that year and figured it might be collectible.

For the past 40 years I’ve hunted with a 12 gauge Remington 1100 shotgun, something I bought in the mid 1970s when I was into duck hunting. Ammunition was no problem. I have enough shotgun shells to start my own revolution, and I was able to get over the remaining tick phobia by buying permethrin treated clothing. It’s not the sexiest outfit, but it gives me a serious comfort level.

The knoll across from the house always has deer on it, but the wind swirls constantly, making it impossible to sneak up on them

Going back into the woods at Sennebec Hill Farm again was an interesting experience. Having roamed the property for sixty years, I thought I knew it like you know your way to the bathroom when the lights are out, but things grow and part of the land has been harvested since I last traipsed through. I discovered that distances and compass points were markedly different. I’ve been over there twice thus far and here are some observations/realizations. There seem to be fewer ticks—only pulled off one so far. Areas that were pretty easy to go through have turned into thickets. I used to see at least one porcupine in the big oaks scattered across the hillside, but have seen none so far, ditto for partridges. I heard one off in the distance, but no sightings. Folks are right about the heavy acorn crop. I saw them scattered so abundantly that sitting and waiting for a deer to snack under a particular tree would be an exercise in futility.

More discoveries include finding most of the woods roads have grown in, the apple trees my father planted in 1949 and 1950 are still producing and the red delicious still live up to their name. I’m never going to climb into a tree stand again. Of course, the fact that every one I built has fallen into decay is a mitigating factor. One thing that never would have occurred to me in the past is the possibility that a couple of the little brooks coming down from the ridge might be worth panning to see whether any gold exists. 40 years ago, the whole ridge was leased by a mining company that was looking for nickle and zinc. Nothing ever came of it, but who knows. One last observation. The guy who did the last wood harvest left a nice number of seed pines, firs and hemlocks to reforest the property.

Deer? Saw none thus far, but there’s one hellacious buck running about. I found half a dozen of his scrapes on the west side of the swamp. I still don’t know whether I’ll shoot a deer if I see one. Just getting back out there and noticing how the forest stills my head is reward enough. 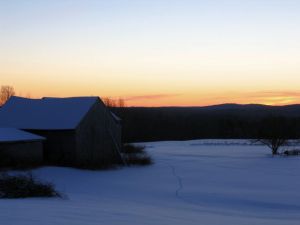