Posted on July 4, 2018 by mainecrimewriters 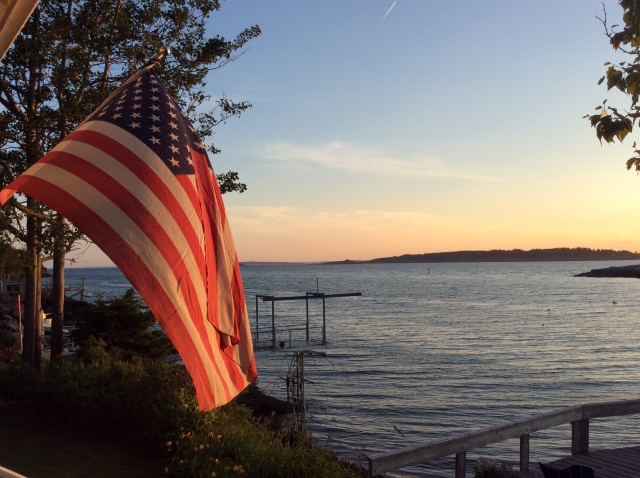 Kate Flora: Most of us are taking a day off from writing today, so we’re sharing pictures of 4th of July celebrations. On Bailey Island, one very special aspect of the 4th of July is the Ice Cream Social at Library Hall. Everyone from great grandmothers to newborns gather to enjoy this tradition. There is a kazoo band and other entertainment. And there is ice cream! 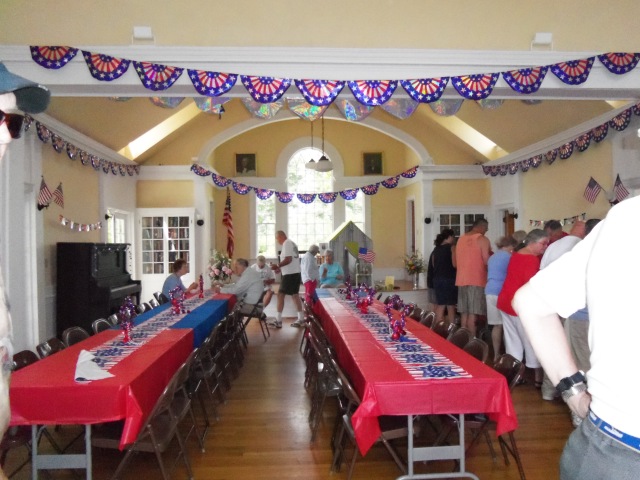 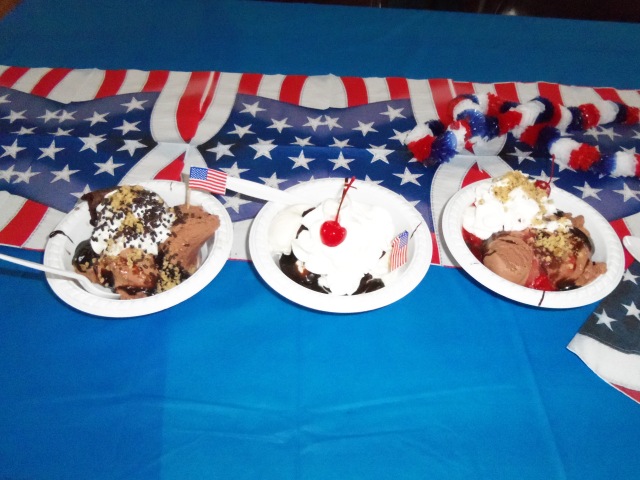 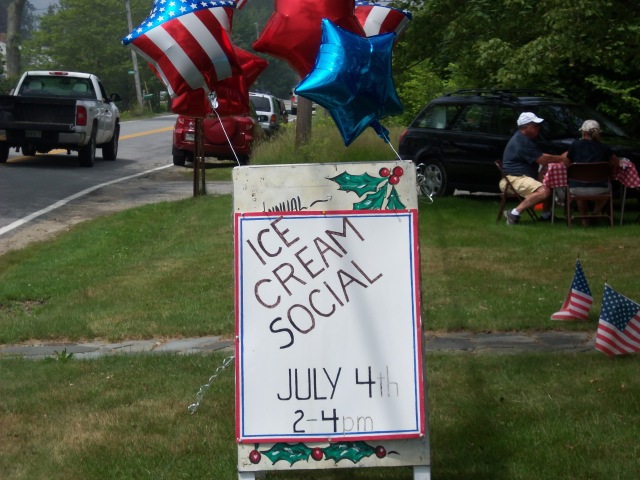 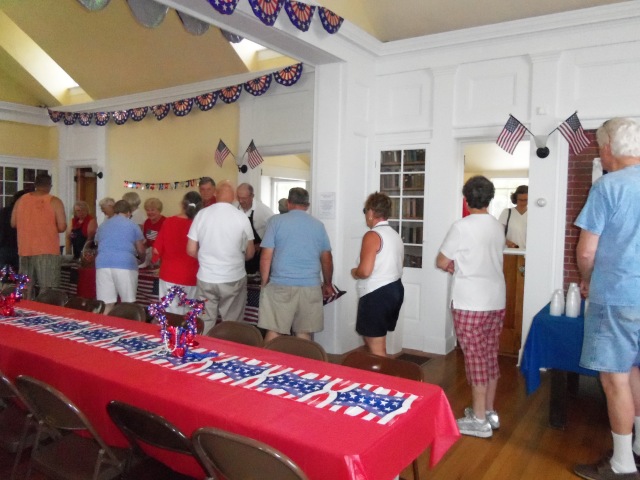 Lea Wait: Can’t find any pictures just now, but two short memories:  When I was a child we always had a family reunion at the home I now live in. Relatives came from Boston and sometimes beyond, and we ate lobster and blueberry cake and all sorts of other goodies. Took days to prepare for, but always an event. Then, much later in my life, my second (and oldest) daughter, Caroline, arrived from Korea on July 3. For years after that, in New Jersey, we celebrated the Fourth of July, and her homecoming,  by watching a tape of 1776, going out for Chinese food with another single adoptive family, and then going to a local veterans’ hospital where there was a band concert, fireworks — and disabled veterans. (I might add — for her first few years in America Caroline was convinced the fireworks were in her honor!) Happy 4th, everyone!

Susan Vaughan: Part of my Independence Day is always spent in Thomaston, at their wonderful, small-town celebration. The parade features 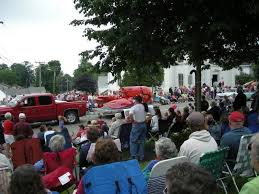 local bands, high school and community, as well as politicians with signs (I expect a lot of those this election year), Revolutionary War reenactors complete with muskets that they fire  into the air, and at least a dozen fire trucks. I always cross my fingers no fires get started in any of the surrounding towns. There’s a Mr. and Ms. Fourth of July, local high school seniors, and a Grand Marshal. Afterward, there’s a chicken barbecue and other vendors. Fireworks cap the holiday. Happy Independence Day to all!

Maureen Milliken: One constant of every Fourth of July for more than four decades has been to listen to Bruce Springsteen’s “Fourth of July, Asbury Park.”

Another constant for many, many years, was that I worked, since I was a journalist and newspapers have few holidays. In fact, there’s usually more news on a holiday. 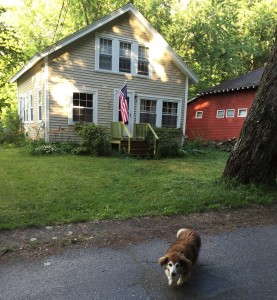 My late dog Emma, posing for her traditional, and final, early morning Fourth of July photo in 2016.

A more recent tradition is that I finally try to get my window boxes filled so that the people who wander by my house during my town’s Fourth of July extravaganza don’t think I’m not holding up my end. Geez, is it summer already?

For the first several years of that, I always took a photo of my dogs, or one of them at least, in front of the house in the early morning before the town gets nuts.

I moved into the house I lived in now on July 1, 2011, which coincided with being management for the first time in my life — holidays off!

I’m lucky to live in a town that knows how to do the Fourth of July, a Main Street-long extravaganza that begins with a fairly loud boat parade on the stream that cuts through town and connects Great and Long ponds at 10 a.m., a parade at 4 and, of course, fireworks at dusk. In the meantime, there are vendor booths, food, music, frog-jumping contests and more. 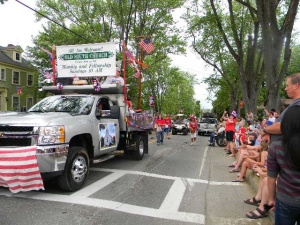 The town’s population multiplies for its day-long Fourth celebration.

I spend my Fourth of Julys at home and it’s great. Sometimes I wander the block over to Main Street, but a lot of it is on my screened porch, reading a book and listening from afar. Not that I haven’t done other things, too. 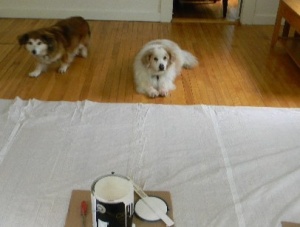 Emma and Dewey supervise the livingroom painting, Fourth of July 2011.

My first year here, I painted the living room. It was a hot, humid day and I could hear shouts and music from Main Street. But it was also nice to be in my little house, with my dogs, painting.

There were a couple years some fellow Maine Crime Writers came to town and we had an excellent time selling books and talking Maine and mysteries to the throngs.

One unplanned thing is that all three of my Bernie O’Dea mystery novels have some Fourth of July element — there must be some resonance with the holiday that makes it a good touchstone in a mystery.

In real life, in my real Maine town, I’ve gone to the parade a couple times, but parts of it also wander by my house once it’s done, so I’ve found I can have my own little parade without having to jockey for a good viewing spot. 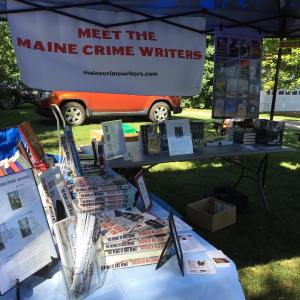 Maine Crime Writers have joined the show at the Belgrade Fourth a couple times.

I also rarely go to the fireworks. I can see some of it above the trees from my front steps, and people in the neighborhood have their own enthusiastic displays, so there’s plenty.

Fireworks are okay, but they bothered my dogs so much that I couldn’t wait until they’d fizzle out for the night.

Last year, I was living away and spent the day in a coworking office writing and doing some freelance works.

It occurred to me the other day that this is the first year in many I won’t have to worry about a dog while the fireworks blast.  Dewey and Emma are both gone, so the photo of the dog in front of the house has also gone by the wayside. I don’t think I’ll take one of the house. The photo would seem empty without a dog in it.

Have a safe and happy Fourth!