Is a MacGuffin Something? Or Nothing?

Susan Vaughan here. In fiction, a MacGuffin, sometimes written McGuffin or maguffin, is a plot device in the form of some goal, desired object, or other motivator that the protagonist and often others pursue. For storytellers as far back as ancient epics, it’s the thing or device that motivates the characters, or propels the plot and action and focuses the audience on a single prop. The specific nature of a MacGuffin can be unimportant to the overall plot. It’s the jewels or the necklace or the Golden Fleece or the elixir or the plans or papers or the microfilm or the secrets that propel the plot. 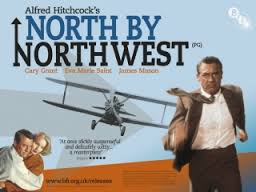 The term was coined by Alfred Hitchcock, according to Donald Spoto in his book about the director. Michael Kerland, writing for Gotham Writers, says that over the past sixty years, writers, and particularly mystery and thriller writers, have adopted the term as their own. I’m using as examples Golden Oldies because they are likely to be familiar to more people. Let’s start with Hitchcock. The plot of North by Northwest (1959) involves an object that everyone in the film is chasing but which has no deep relationship to the plot.

The movie is a tale of mistaken identity, with an innocent man, Roger Thornhill (Cary Grant) pursued across the United States by spies trying to prevent him from blocking them from smuggling out microfilm containing government secrets. They believe him to be the agent on their trail. It turns out later that there is no such person, that the name was a decoy to keep the spies from suspecting Eve (Eva Marie Saint), the government’s plant.

In an earlier film, Casablanca (1942), the MacGuffin is irrevocable German “letters of transit” that can be used to escape to a neutral country. The plot circles around those letters, and their existence motivates the action. The major distinction between this application of a MacGuffin from the traditional is that, within the first ten minutes of the film, Ex-Pat American Rick (Humphrey Bogart) has the letters in his possession. Much of the plot is about what he will do with them. 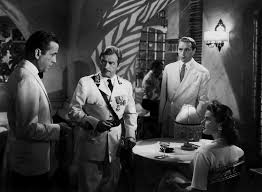 Laszlo (Paul Henreid) offers him money. Rick’s former lover and Laszlo’s wife Ilsa (Ingrid Bergman) attempts to repair their love. He refuses them both. In this film, the MacGuffin is not only a plot device, but a character engine as well. Rick must choose between his love for Ilsa and helping her and her Resistance-leader husband escape the Vichy-controlled city. In reality, there was no such thing as letters of transit. People could come and go from Casablanca freely.

In novels, MacGuffins abound. I could spend words on the Ring in J.R.R Tolkien’s Trilogy or the map in Robert Louis Stevenson’s Treasure Island, but since we are Maine Crime Writers, I’m sticking to mystery and suspense and going with the classic example every writer of craft uses—Dashiell Hammett’s The Maltese Falcon (1929). Originally serialized in a magazine, The Maltese Falcon features Sam Spade, the private detective from whom a whole school of hard-nosed American PIs evolved. The MacGuffin is the eponymous statuette of a bird, supposedly having been given in 1539 by the Knights of Malta to the Spanish king and jewel-encrusted beneath the black enamel. To possess the Black Bird, people steal, women try to seduce Spade, and people are murdered. John Huston made his directing debut in the 1931 film adaptation, a film noir classic and another Bogart vehicle.

I used MacGuffins as the plot devices in my Devlin Security Force series. In On Deadly Ground, it’s the Mayan god figurine the characters must return to its temple and that assorted bad guys want for its perceived powers or its monetary value. In Ring of Truth, the MacGuffin is a hidden trove of crown jewels that the hero, whose jewel-thief father stole them, must retrieve in order to clear his name. And in Cleopatra’s Necklace, well, I probably don’t need to explain the MacGuffin in that one.

In a novel or film plot, someone has to be after something, and some force has to be in his or her way, or there’s no story. In order to motivate characters and make the plot one the reader or audience cares about, the MacGuffin has to be plausible and worth the trouble. The MacGuffin isn’t merely the goal the protagonist is striving for; it’s often also the reason for the overwhelming odds. 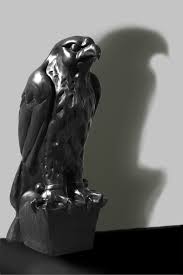 Some movie buffs argue that a MacGuffin is a meaningless, empty vessel—a gimmick only. If the object being sought could be changed to anything else and the switch doesn’t alter the plot in any way, then you are chasing a MacGuffin. But I disagree. My Mayan god figure is a plot device, the inciting “object” that triggers the search plot, as are the Black Bird in Hammett’s novel or the microfilm in Hitchcock’s movie. Each is the object of the greed or desire or need that moves the plot. I argue that an object is not a MacGuffin ONLY when it does not drive the story.

I’d love to hear from you about other novels or films with MacGuffins.

Susan Vaughan loves writing romantic suspense because it throws the hero and heroine together under extraordinary circumstances and pits them against a clever villain. Her books have won the Golden Leaf, More Than Magic, and Write Touch Readers’ Award and been a finalist for the Booksellers’ Best and Daphne du Maurier awards. A former teacher, she’s a West Virginia native, but she and her husband have lived in the Mid-Coast area of Maine for many years. Her latest release is HIDDEN OBSESSISON, the follow-up to PRIMAL OBSESSION, available as digital or in print on Amazon. Find her at www.susanvaughan.com or on Facebook as Susan H. Vaughan or on Twitter @SHVaughan.
View all posts by susanvaughan →
This entry was posted in Susan's posts and tagged MacGuffin, Maine Crime Writers, mysteries, mystery writers, mystery writing, Susan Vaughan. Bookmark the permalink.

3 Responses to Is a MacGuffin Something? Or Nothing?