CRITTERS IN HAND: LESSONS FROM MOM

John Clark reflecting on generations and what they can pass on. Kate and I grew up on 187 acre Sennebec Hill Farm where we spent plenty of time outside as kids. We created hiding places on the hill across from the house, named places like the secluded spot we called the deer’s bedroom, dug clay from the brook at the back of the orchard (even sent off a sample to a family friend in New Jersey who was a chemist. He sent back an assay report that was a hit at school), had clam races in the shallows where we swam and even found a radiosonde attached to a deflated weather balloon that we sent back to the government so we could learn where it had been launched. In fact, we were outside so often and so much that Mom had a 4 inch cowbell she rang while standing on the back porch so we’d know when it was supper time.

Sara and Lisa on the shore of Sennebec Pond

As we got older, we tended to spend less time in the outdoors. School, summer jobs, then college, all frequently pushed nature aside. For both Mom and I, addiction also stole away lots of time as well as interest in the natural world. Part of our recovery involved the process of relearning to connect with nature. Mom wrote her Camden Herald column From The Orange Mailbox, Notes From A Few Country Acres for more than twenty years. She shared thoughts, observations from what she saw from her windows, aspects of local history and the nature of friendships, all in a way that drew in readers and gained her friends across the globe. 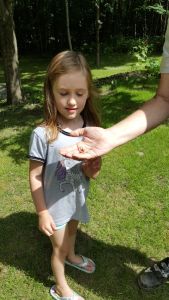 Piper and Grampa with golden cricket

When Kate, Sara, and I had children, Mom spent time with them, exploring the farm, sometimes for entire afternoons. It not only expanded their world, but helped her get back in touch with her own inner kid. I learned to do the same. One of my fondest memories with my daughters when they were young was at an AA picnic on Islesboro. I helped a bunch of kids build a small tide pool. We spent hours after it was constructed, stocking it with crabs, starfish and sea urchins.

Lisa and Cousin Jake with frogs at Sennebec Hill Farm

As of July 16th, I have three grandchildren. Piper is six, Reid is eight months and Gemma is eleven days old. By the time Reid was six months old, I’d spent more time with him than I had with both grandfathers and my maternal grandmother. Grandparenting in the 1950s and 1960s wasn’t a priority, at least in my family. Likewise for my daughters. Aside from my mother, the other three were pretty hands off. That’s not how Beth and I work. She took care of Piper for 2 ½ years and is doing the same on weekdays for Reid, as well as on Tuesdays and Thursdays with Piper. I’m with them almost every Thursday afternoon. In addition to reading and being goofy, Piper and I have a routine. We go critter hunting. It’s similar to what Mom did on the farm with her grandchildren. We look under rocks, boards and rotting logs to see what we can find. Slugs predominate, followed by earthworms, ants and sowbugs, but we’ve also found four salamanders, a frog, a couple toads and last week, golden crickets and a green worm we think is a Variable Oakleaf Caterpillar. We’re hoping to find a snake sometime soon. We’ve also used my metal detector a couple times, but the only treasure thus far has been an old gear and some flattened tin cans. Another bonus has been snacking on ripe raspberries and blueberries.

Piper and Reid entertaining each other

Piper and Reid have three grandfathers because of divorce and remarriage. Grampa Jack bought both of them lifetime hunting and fishing licenses. Piper and I went a couple weeks ago and she caught five sunfish and a yellow perch. A week later, she told me she wants me to show her how to clean a fish. We’ll be after a trout or two soon so I can help her add to her skills.

Gemma Claire Barrese will be more challenging, given that she lives in Port Chester, NY, but I have plenty of time and am more than happy to use as much of it as necessary to invest in these three wonderful kids.

4 Responses to CRITTERS IN HAND: LESSONS FROM MOM