Dorothy Cannell:  Every so often since the movie came out I’ve thought about making a

Bucket List. I have a dear friend who did this and has joyfully checked off every aspirational item.  This inspiration fueled me to put some effort into get going on mine.  “What,” I asked myself, “would I most regret not doing, or seeing, in this lifetime?  What would keep me awake nights throughout eternity, madly scribbling down what could have beens?”  That was several years ago and the closest I’ve come to progress in this regard is in conversations with my husband, Julian after dinner video watching.  The latest being American Dreamer, a romantic, comedy thriller set mainly in Paris. It’s an old favorite of ours that we’ve lost and rebought at least three times.

“I really think I‘d like to see Paris,” I said.

“Mmm!  That would be nice. But wouldn’t you rather go to Rome?”

“It’s alright for you being Jewish, “I pointed out gently, “but I have this thing about Christians being thrown to the lions.”

“They only have stone ones now.”

“There has to be a zoo, with cages left accidentally or purposely let open.”

There was a pause while bullets smashed through the screen on the drawing room window and our dogs started howling.  When that died down Julian readjusted the pillow behind his head and made a magnanimous suggestion:  “Wouldn’t you rather go to Amsterdam?”

“I rather fancied seeing the Mona Lisa.”

“But Amsterdam has all those Rembrandts.  Remember how we enjoyed seeing some when on loan to the Art Institute.”

“Oh, yes!”  I thought back fondly.  “There was that one with a dog in it.  He could have been dead for hundreds of years with no one caring that he ever existed, but thanks to a man who went from paining by numbers to putting out some pretty decent work, he is immortalized.”

“Getting portraits done of these two?”  I looked at Teddy and Watson.  “I have them, no painting could equal that.”

“A weekend in Chicago, visit to the Art Institute included.” 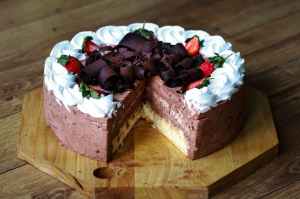 “Perhaps.  But what I meant was I’d like a piece of that cake if there’s any left.  I can get it myself.”

“That would be nice.  And perhaps some almonds and a splash of brandy.  Would you like me to restart the movie where we got sidetracked?  Or would you rather watch something else, or read?”

“Go back.  It’s all so wonderfully familiar.  It’s you me, Watson and Teddy having the sort of evening we like.  I don’t want to go to Paris enough, I just like the idea of going.  I think I’ll scrap travel from the list and zero in on doing something meaningful to go on the bucket list.”

“Such as making another cake tomorrow?”

A touch of superiority to my shake of the head.

“Such as saving a stranger from drowning in a raging sea.”

“But you can’t swim more than two strokes. Any help from you would be lethal.”

“You’re right,” I sat back down with my own piece of cake and a cup of tea, “And it is asking a bit much of anyone that they put their life in danger so I can do a noble deed in order to be fulfilled.”

“You could take swimming lessons.”

“At the Y with all those horrible public showers. I’m not that adventurous.  In fact I’m not adventurous at all.”

This entry was posted in Dorothy's Posts and tagged Bucket Lists, Dorothy Cannell. Bookmark the permalink.