Sometimes I wonder If I’ll Ever Learn…

Vaughn Hardacker here: You may recall that in an earlier blog I wrote about having to put down Maggie, our Maltese, and obtaining a Yorkie puppy. My significant other, Jane, convinced me to get another dog, although our age (I turned 71 this summer) made me reluctant. I’m a glass half empty type of guy and I used the excuse that there is no guarantee that we’ll live the fifteen years that Yorkshires live on average. What will happen to the dog then?

To get to the point, as the time came for us to take Maggie (Jane’s companion for seventeen years) to the vet Jane became more and more despondent. It quickly became evident that she was devastated by the prospect of losing her best and most loyal friend (until I came around–isn’t that a scary thought!) and I relented. So no sooner did I tell her okay let’s get another dog. She immediately showed me a post on facebook. A woman in Pittsfield had a male Yorkshire Terrier for sale. It was then Jane confessed that she’d already been in contact with her. That was on Saturday. Monday came and we took Maggie to the vet (an experience that I never want to go through again). On the way home I was informed that we could pick up the Yorkie in Pittsfield the next day… Enter Skipper.

Now, lets jump forward ten months. Jane had a dog stroller (I had no idea they made such a thing!)

Skipper before visiting the Groomer

that had been Maggie’s and she posted it on facebook (there is an Aroostook County sell and swap page) and was called by a woman in Madawaska who was looking for one. Oh, by the way, she had four Yorkie puppies, three males and a female, she was looking to sell to someone who would give them a good home. Hello, Ginger. Yup, Jane bought the little female.

Now, lets morph back to Skipper. Ginger was two pounds, twelve ounces and Skipper, who is now almost eleven months, old weighs in at nine or ten pounds. Ginger’s parents were both small so the chances are very good that when she is full grown Ginger will not weigh more than five or six pounds. My concern was how was Skipper going to act?

We brought Ginger home and put her in her playpen (yuh, we not only have a puppy stroller, we have a playpen). Skipper’s first reaction was to stare at her and growl. He stuck his nose 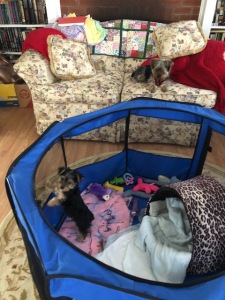 against the side of the playpen and surprisingly Ginger went over and pressed her nose against his. Before we knew it, Skipper was on the love seat guarding the puppy!

Despite all my reservations and the size differential Ginger stood her ground and gave Skipper as much as he gave her. In fact, we’re constantly amazed at how well they get along to the extent that Skipper seems to cater to her (even when she stands on him).  The biggest surprise came the first time they played together. Apparently Skipper thought he was going to overwhelm her. He quickly learned that he might be bigger, but she was nastier and more aggressive.  In fact, I’m amazed that they don’t hurt one another when they rough-house.

Ginger has been with us for two weeks now and the two of them are attached at the hip. When Ginger is in her playpen and the door is closed, Skipper runs all over the house looking for her. Though I think there are times when he enjoys being able to chew on a Bully Stick without being assaulted.

The only downside is that every day they act more and more like human kids–whatever one has the other one wants. Never in my wildest nightmares did I think that at 71 I’d be raising kids again! I do have to admit though that it’s nice having someone else run the house for a change (it sure isn’t Jane or me!).

Vaughn C. Hardacker has completed five novels and numerous short stories. He is a member of the New England Chapter of the Mystery Writers of America and the International Thriller writers. Three times he has been a finalist in the Maine Literary Awards Crime Fiction category, SNIPER, in 2015, THE FISHERMAN in 2016, and WENDIGO for the 2018 award. The second installment of his Ed Traynor series, MY BROTHER'S KEEPER was released in July 2019 and is available through all major booksellers. A signed copy can be ordered directly from Vaughn (vhardacker@gmail.com). THE EXCHANGE his next crime/thriller will be released on September 4, 2020. He is a veteran of the U. S. Marines and served in Vietnam. He holds degrees from Northern Maine Technical College, the University of Maine and Southern New Hampshire University. He lives in Stockholm, Maine.
View all posts by Vaughn C. Hardacker →
This entry was posted in Uncategorized, Vaughn's Posts and tagged dogs and writers, pets, writer's dogs, Yorkie Dogs. Bookmark the permalink.

5 Responses to Sometimes I wonder If I’ll Ever Learn…