Posted on September 21, 2018 by Brenda Buchanan

A discussion on Twitter this past weekend asked people to tweet about the libraries they love the most. I follow a lot of writers, so was not one bit surprised by the number of shout-outs for people’s hometown libraries. For those of us who live to read and write, there’s nothing like your first library. 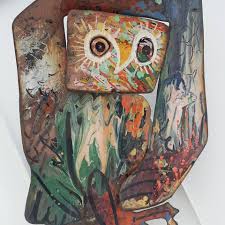 The Fitchburg Public Library has long incorporated this image of an owl into its logo.

Because I couldn’t possibly cover my feelings for the Fitchburg Public Library in the word limit for tweets, I thought I would expound on the subject here.

I have never read this book, but will have to track it down.

My hometown is not a fancy place now, and it wasn’t when I was growing up, either. A small city in central Massachusetts, it’s the home of a state college we called “TC” for Teachers’ College, now known as Fitchburg State University.

But the college wasn’t Fitchburg’s dominant institution when I was a kid, its paper mills were.

A paper mill in my hometown

The smoke-belching behemoths strung along the banks of the Nashua River made a lot of money for their owners, and in the best tradition of local corporate ownership, their owners invested some of their profits in the community.

The city’s gem was the Fitchburg Public Library, a handsome building on Main Street built by the Wallace family in 1885, which had a separate children’s room as early as 1899.

A lot of towns have libraries built by wealthy benefactors (famously, the Carnegie family) but few boast an entire separate building (connected to the mothership by an indoor walkway) dedicated to the library needs of children. Built in 1950, the Fitchburg Youth Library was paid for with contributions from the city’s youth and another substantial gift from the Wallace family. 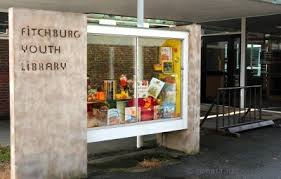 Home away from home in my formative years.

Spacious and well-stocked, the Fitchburg Youth Library boasted comfortable, kid-sized chairs in front of a kid-sized fireplace and lots of kid-sized tables where you could spread out and do homework or art projects. The librarians were helpful and knew all of us regulars by name. My mother used to drop me and my sisters at the library when she had a lot of errands to run, knowing we’d be safe and absorbed until she returned.

But the FPL’s dedication to encouraging literacy and library skills among the city’s youth didn’t stop with the stand-alone library—we also had the bookmobile, a retrofitted bus that lumbered up and down the hills of the ‘burg, bringing books to kids and adults who couldn’t get to the main library.

The bookmobile driver was a fellow named Mr. Scott. He and another mobile librarian answered questions and helped us make selections.

When we took out books to the checkout they’d touch the little inky metal part of the card to the tips of our noses, a signal to the entire neighborhood that we’d been to the bookmobile.

In adulthood I’ve held cards at enormous libraries (the Boston Public) and tiny libraries (Friend Memorial in Brooklin, Maine). I spend lots of time at the library in my current community (the wonderful Walker Memorial in Westbrook) and have a special place in my heart for the Peaks Island branch of the Portland Public Library.

I’ve been honored to give readings at dozens of libraries across the state, and I’m continually impressed by the creativity and resourcefulness of local librarians and local library boards as they rise to the challenge of the internet and develop new ways remain engaged with their communities.

I love them all, but if I had to choose the library I hold most dear it would have to be the marvelous little jewel tucked behind the big library in Fitchburg, with an entrance of its own on Newton Place, the place I first found my home among the books.

Commenters: What is your favorite library, and why?

Brenda Buchanan is the author of the Joe Gale Mystery Series, featuring a diehard Maine newspaper reporter who covers the crime and courts beat. Three books—QUICK PIVOT, COVER STORY and TRUTH BEAT—are available everywhere e-books are sold.  She is writing a new series that has as its protagonist a Portland criminal defense lawyer willing to take on cases others won’t touch in a town to which she swore she would never return.