Harold Emerson is immediately likable, as is his companion Mary. They also have that signature toughness so admirable in rural Mainers. Years ago, Mary survived an attack by a deranged neighbor that left her unable to work for several years, but she protected her youngest daughter and eventually recovered. Harold has dealt with scoliosis for much of his life and has 25% function in one kidney. The other doesn’t work at all and, no, he’s not on dialysis. As he puts it, “I don’t have the money and I don’t have the time either.” 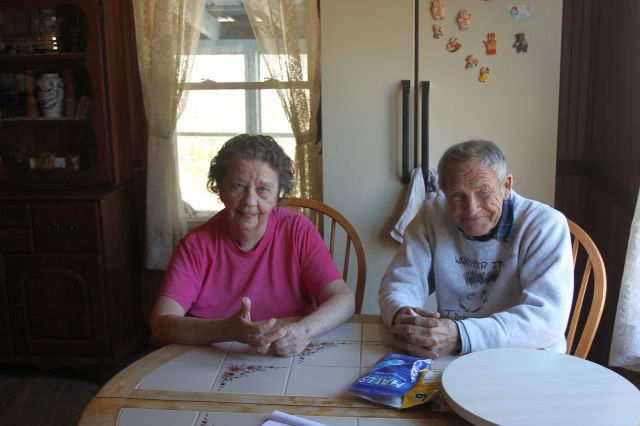 The rescued cabinet is in the background.

I met Harold when he started working part time at the Hartland transfer station. I noticed how he went out of his way to help those struggling with their trash or recycling. We started chatting while I went through recycling to get codes from Kelloggs and Coke products. His pithy and salty commentaries of those not smart enough to put stuff in the right place not only resonated with me, but were always good for a Sunday afternoon chuckle. It wasn’t long before I discovered that Harold was one of those human treasures unique to Maine, a self-taught tinkerer who was in it as much to keep busy and help others, as to make a buck.

Last Monday, I sat down with Harold and Mary to find out more about them. He’s 78, she’s 80 and they’ve been together for eighteen years, living on 11 acres at the end of a 500 foot driveway that can be a challenge in winter and mud season. They heat with wood most of the time, but Harold is ultra careful to make certain the woodstove is clean and carefully closed when they go somewhere. That stems from the loss of a brother in a house fire when his sibling was eight. The memory stays with him even after sixty plus years.

Harold was born in Burnham in 1940 and remembers moving around frequently because his father worked in the woods and work was hard to find. After dropping out of school in the seventh grade, he joined his father, cutting pulp and limbing trees. They didn’t have a chainsaw, but still managed to cut two cords a day with a bucksaw. From there, Harold went to work in Palermo and South China sanding winter roads when he was seventeen. His boss, recognizing untapped skills, put him to work in a garage where he honed mechanic skills learned by fixing family cars and trucks. Harold says he’s always liked hanging around garages and at various times worked in both repair and body work, as well as driving a wrecker and pumping plenty of gas, even for a stretch on Mass. Avenue in Boston.

He eventually opened his own garage in Burnham until the town opened a transfer station and hired him to run it. Like many older Maine residents, Harold hasn’t really retired, partly due to economics, but also because he likes keeping busy. In fact, he still cuts and hauls all his own firewood. Not long after starting part time at our transfer station, his skill with small engines started getting attention. Folks would take a minute to pick his brain about why their lawn mower or tractor was doing something other than running. More often than not, Harold could give an educated guess as to the problem and how to remedy it. That segued into people offering him equipment they didn’t want to keep or bother to fix, then he started being asked if he could repair stuff. He estimated he repairs eight to ten per year. Some he resells, others he gives to people in need who cannot afford to buy one. He gets more from the satisfaction of doing a good deed than money could provide.

Harold bought this body for $400 and when it’s rehabbed, it will go on his truck.

Not long ago, someone brought in a pump and a box of fittings. Harold alerted the town crew as he realized the pump could be used at the town wastewater treatment plant, saving taxpayers as much as $1500. He also spots things like appliances, furniture and household items that still have value, directing townspeople to deposit them beside the transfer station office where they quickly find new life. Harold and Mary’s kitchen sports a china cabinet he brought home recently and refinished. It’s pretty spiffy. 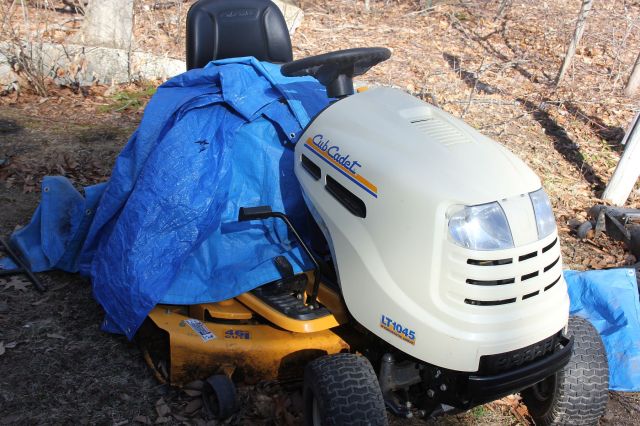 This is waiting for a new engine.

I asked him how long it takes to complete a repair. To swap out a lawn tractor engine takes a little more than an hour, while rebuilding one, providing parts are at hand, can be done in three to four hours.

One interesting note. After they got together, Harold and Mary realized they’d gone to school and church as kids, even riding the same bus.

8 Responses to One Tough Tinkerer