John Clark starting 2018 with a look at four recently published young adult titles. I’ll venture to say that YA authors are pushing the envelope further than most other genres…So far and so fast that Nancy Drew would probably need a week on the psych ward if she picked up almost anything good these days. That’s not a bad thing. Having such a vast array of good reading at my fingertips sure helps when the snowplow weasels in Hartland seem determined to fill in our driveway right after we’ve cleared it, sometimes three times in the same day.

Everless, a first book by Sara Holland. Harper Teen, 2018 ISBN: 9780062653659. Jules Ember is a survivor in a fantasy world where the haves live long, thanks to an alchemical discovery ages ago. Blood, drawn from people and mixed with iron, can transfer time from one person to another. The village where she and her sickly father live is mostly peopled by the poor who are obligated to pay for food and lodging with their time-blood. When the weather is decent, Jules can hunt for enough so they get by, but it’s now winter and they’re two months behind on payments. Desperate to save her father, she signs on to be a servant at Everless, the estate where she and her father lived when she was a small child. Roan, younger son of the family is marrying the queen’s adopted daughter and boys and girls can earn a year’s worth of time blood coins in a month if selected to work during the festivities.

Her father forbids her to go, but her desperation to keep him alive is stronger. After getting selected and joining the cadre, Jules begins to realize that not everything is as she remembered before she and her dad were banished. Flashbacks, a gradual series of discoveries, her realization that Roan’s older brother Liam isn’t the evil person she remembers, coupled with an earth shattering discovery related to a book from her childhood and legends surrounding an alchemist and sorcerer whose feuding supposedly altered their world ages ago, make this a total page turner. It ends in a satisfying way, with a strong hint at a sequel. It there is one, I will order it the moment I can. 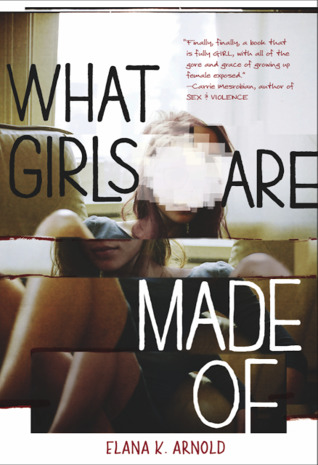 Next is What Girls Are Made Of by Elana K. Arnold, Carolrhoda Lab. 2017 ISBN: 9781512410242. First off, this author isn’t afraid to take fiction to risky places. Burning, published in 2013, is one of those books that gets stuck in your head and stays there for a long time. As for this one, the first sentence on the flyleaf says it all. “This is NOT a story of sugar and spice and everything nice.” Instead, it’s a story about a girl whose mother told her while they were folding laundry, that there was no such thing as unconditional love. Nina Faye was fourteen when that conversation took place and it rumbles about in her head throughout this story.

Told in alternating moments past and present, it’s Nina’s journey to figure out whether what Mom said was true. Her breakup with her boyfriend with whom she was willing to do pretty much anything sexual (although her inability to have an orgasm while they were intimate seemed to play a role in their breakup), is followed by her discovery that she’s pregnant. How she deals with that decision and the accompanying emotional consequences are pretty strong emotionally. There’s also her volunteering at an animal shelter where dogs and cats who overstay are euthanized. Her reason for getting placed there also factors into her emotional baggage, as does her growing awareness of just how empty her parents’ marriage has become. Think of it as an X-rated literary version of Ladybird. Not for the sexually squeamish, but a darn fine read.

That Inevitable Victorian Thing is by E.K. Johnston, Dutton, 2017. ISBN: 9781101994979. She’s written several others and my favorite is Exit, Pursued By A Bear. Her latest is quite imaginative, taking place in an alt-history. In it, the British Empire still reigns supreme, the United States is in complete disarray, akin to what the South was like following the Civil War, and young ladies all look forward to their coming out parties. Victoria-Margaret is the crown princess. She’s also Black and Chinese, thanks to an emphasis on genetic matching to encourage healthy offspring. Her godfather, the Archbishop of Canterbury, (the Church of England has done some serious mellowing in this story and is the kind of organization where Father Guido Sarducci would feel right at home.) oversees a worldwide computer network where young people get a complete genetic profile that includes DNA and suggested matching profiles from all over the world as a chip that downloads on their computer.

Victoria has been given one summer of freedom before she must get serious about her responsibilities. She travels to Toronto where a month long series of coming out parties are happening. She’s staying with Elizabeth, outgoing daughter of her father’s friend. While there, she meets Helena, daughter of a world famous geneticist. Helena is less wealthy and much quieter, hoping to get her long time best friend August to ask her to marry him. However, the best laid plans often go awry. Disturbing news about her genetic codes forces Helena to rethink everything, her growing friendship with Victoria-Margaret, coupled with August’s shame, when his father discovers how he’s dealt with a threat to their shipping empire, bonds the three of them together in a surprising way that allows each to have at least part of the life they so badly want. Unique and a very interesting read.

The fourth book, Unearthed is by Amie Kaufman and Meagan Spooner (The YA equivalent of Douglas Preston and Lincoln Childs) Disney-Hyperion (January 9, 2018) ISBN: 9781484758052. Like their Starbound Trilogy, this is a finely crafted blend of science fiction, mystery and romance. It opens on an alien world where a vanished race sent Earth a cryptic message. The first humans to land were so eager to explore the biggest temple, most were destroyed on live feed video when they triggered a trap. Jules Addison and Mia Radcliffe couldn’t be more different, but the two teens share a desperate need to get past the puzzle traps left by the aliens. It’s a true page turner that ends with a huge WHAT!?!