The Post Where I Announce We’re Moving to Portland

Yes, we’re going to be full-time Mainers! Both Bill and I are excited about this next chapter. The plan (there’s always a plan) was to sell our house in Massachusetts (check–you can read about it here), and then come up to our home in Boothbay Harbor and stay until we leave for Key West mid-December. We weren’t going to rush into anything. We definitely weren’t.

But I was keeping tabs on the Portland real estate market, just to educate myself, I said. Bill and I went to a few open houses whenever we were passing through. Casually, I told people, we’re exploring.

Then, in mid-June, when our whole family was up in Boothbay for the weekend, I found a place online that seemed perfect. Our home wasn’t even on the market. It was too soon. Nonetheless, I shot an inquiry off to the listing agent, could we maybe see it on our way home to Massachusetts?

That didn’t work out and between putting our house on the market and helping our son and his family move from Connecticut to Virginia, we didn’t make it back to Maine until after July 4th, the Friday before Books in Boothbay, in fact.

We looked at the place on our way up and, surprisingly, it was even nicer and more perfect for us than the photos. Even more compelling, given all we had been through in the spring, it needed almost no work, not even paint. We drove around the neighborhood, which we kind of, sort of, knew and liked it. (It seems to be in an area of shifting designations, most recently I think it has been called the India Street neighborhood.)

I was still burbling about it the next day when I saw Lea and Kate.

By that point our house in Massachusetts was under contract, but it hadn’t closed, which meant we didn’t have the money in our pockets to go around buying condominiums in Portland, or anywhere else. So though we loved the place, we waited. But both of our thoughts kept returning to the house.

Finally, everything came together. (Knocking wood furiously. We don’t close on it until this Friday.)

Barb’s study, where the magic will happen, starting fall 2017

It’s a four story townhouse, with an elevator, handy because the kitchen is on the third floor. My favorite part is that Bill’s study is on the first floor, and mine will be on the fourth. I love him, but… No water views, sadly, though last time I was there I glimpsed a tiny sliver of Casco Bay through the chimney tops.

Bill’s study, where the magic will also happen, three floors away from Barb, a relief to them both

It all feels a little impulsive and crazy, but also thoughtful and well-considered. We’ve always loved Portland, since we started coming there in the late eighties when we used to camp at Sebago. Portland’s future was just a glimmer at the time, but we still thought it was cool. Also, we’re city people at heart. Neither of us has ever had dreams of quiet country nights. 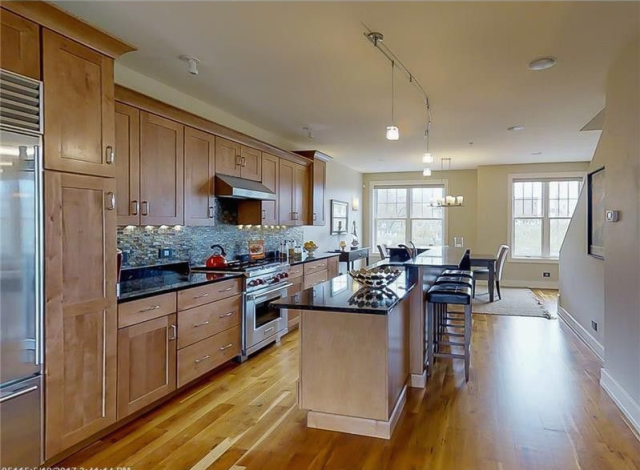 The kitchen and dining areas. By the way, the rooms in all these photos were professionally staged. Enjoy. They will never look so polished again.

But, it will be an adjustment, no doubt. We’ve never lived in a house less than 100 years-old, this one was built in 2007. And we’ve never lived in a condominium association. Because there are some ongoing issues, we were given all the minutes of the past year’s meetings prior to close. There were some passages I found hilarious, but maybe I won’t when I’m in the middle of it?

So, we’re going to be Portlanders, or is it Portlandites? Surely not Portlandians, that’s the other coast, right? So much to learn! I’ll have to rely on my Maine Crime Writers friends to find dentists and doctors, hairdressers and mani-pedi places. Things I haven’t changed in years. It’s a little daunting. But as my business partner used to say, you should always be moving toward something, not just away from something, and that’s what it feels like to us.

Barbara Ross is the author of the Maine Clambake Mysteries and the Jane Darrowfield Mysteries. Her books have been nominated for multiple Agatha Awards for Best Contemporary Novel and have won the Maine Literary Award for Crime Fiction. She lives in Portland, Maine. Readers can visit her website at www.maineclambakemysteries.com
View all posts by Barbara Ross →
This entry was posted in Barb's Posts and tagged Moving, Portland Maine. Bookmark the permalink.