Oh, The Sacrifices We Make for Art!

Lately I have been thinking about…oysters.

That is to say, I have been acutely aware that when I turn in the sixth Maine Clambake Mystery, Stowed Away, on March 1, it will be time to write a proposal for the next three books in the series.

But it will be winter. And I will be in Key West. Which means I need to do any on-the-ground research for the proposal (and really, if the proposal is accepted, for the first book in the series) now. This summer.

So my mind has been ranging over what topics and murders and mysteries I could cook up to show off my part of Maine.

I knew, of course, that there were several oyster farms on the Damariscotta River and I’d gotten intrigued by aquaculture, just generally, but also via a series of short films done by the Island Institute. Many of Maine’s fisheries are gone and the main one that’s left, lobstering, is imperiled as the water in the Gulf of Maine gets warmer and more acidic and the lobsters move north. Smart communities continue to adapt to changing circumstances.

I started looking into how to learn more about oyster farms. I always thought once I had a few books published, it would get easier to approach people to interview them for my books, but it hasn’t. It’s the dumbest thing. I learned long ago when I documented corporate procedures for a living that people love to talk about their jobs, in detail. Let’s face it, most people don’t have anyone in their lives who’s terribly interested in what they do day in and day out. But for some reason asking people I don’t know about this stuff fills me with anxiety. Not the interviewing part, the asking. So I looked for alternatives.

And I discovered the Damariscotta River Cruises. They take you on an afternoon cruise to look at oyster farms and watch the farmers at work. Fantastic.

But before I even booked tickets I had an e-mail from fellow Maine Crime Writer Lea Wait who lives just up the road. She and her husband Bob had their eye on a Damariscotta River Cruise, too, but they were interested in the evening trip, a wine and oyster tasting. Were we interested in going along? Were we!

The evening we went (tasting tours are Wednesday and Saturday evenings during the summer) was, like so many days this summer, absolutely gorgeous. The river boat was truly cool, comfortable, covered. It even had a head. 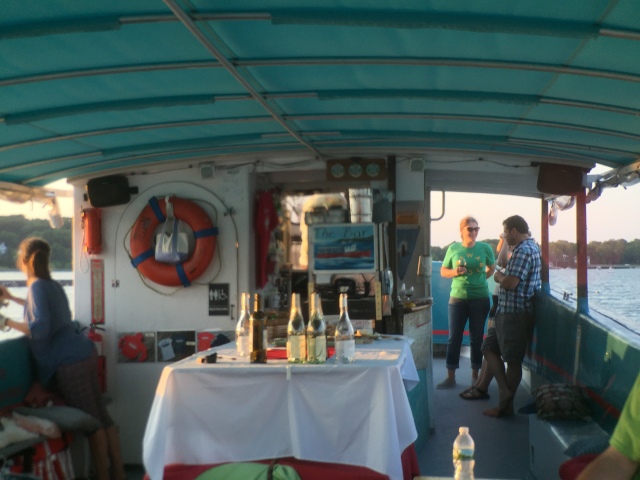 The owners were incredibly knowledgeable about oysters and they’d brought along a wine expert and an expert on hard cider.

We got to taste oysters from five different Damariscotta region farms, with generous wine pairings. With every round there was a description of the oysters. How oysters taste and feel depends very much on the variations of how they are grown. It takes at least two years to grow an oyster to a size for eating and those young ones will be smaller and lighter. Some oysters are grown entirely in the river, where the warmer water makes them grow faster. Others are grown in the river and then “finished” for three months in the cold ocean, which gives them a brinier, heartier taste. What you prefer is entirely a matter of personal taste. The wine pairings, most from France, were also really delicious and interesting.

I learned a ton, including some really good reasons people might kill one another over oysters. Lea got some leads for stories, too, on the wine side of things–I’ll say no more. 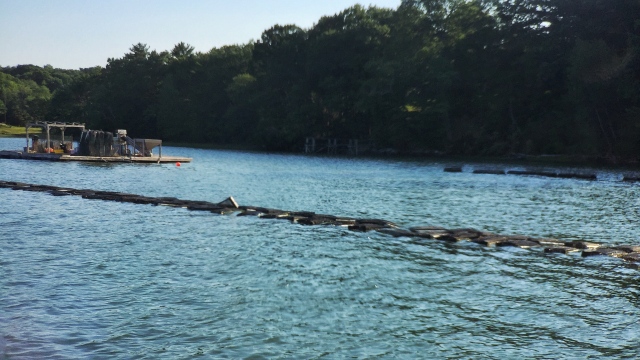 For those who don’t like oysters, there were wonderful cheeses and crackers on board. For those who don’t drink wine or cider, there was a full bar including non-alcoholic drinks. In addition to the oyster farms, we saw seals and eagles and, of course, the beautiful river itself.

And, of course, a beautiful summer evening spent eating and drinking great wines and talking with interesting, companionable friends. I cannot recommend this trip enough.

Barbara Ross is the author of the Maine Clambake Mysteries and the Jane Darrowfield Mysteries. Her books have been nominated for multiple Agatha Awards for Best Contemporary Novel and have won the Maine Literary Award for Crime Fiction. She lives in Portland, Maine. Readers can visit her website at www.maineclambakemysteries.com
View all posts by Barbara Ross →
This entry was posted in Barb's Posts and tagged Damariscotta River Cruises, oyster farms. Bookmark the permalink.

18 Responses to Oh, The Sacrifices We Make for Art!