Posted on September 1, 2020 by kaitlynkathy

Kaitlyn Dunnett/Kathy Lynn Emerson here, reprising and expanding on a blog I first posted here several years ago. It was called “The First RFD Carrier in Town” and was about my grandfather, Fred Gorton, who was the first RFD carrier out of Liberty, New York. He started on March 2, 1908, when the whole idea of Rural Free Delivery was new. The mailmen, or carriers, who made $67.50 a month, provided their own horses and wagons and feed for the horses, too. In those early days, the RFD carrier usually worked from 10:30 until 4:30. Fred traveled a route twenty-seven miles long. At the end of the day he emptied all the mail he’d collected into a big tray in the post office in Liberty.

Fred had a horse named Old Dobbin for the first five years he worked this job. His first wagon had no top. He used an advertising umbrella for shelter. In 1915, Fred bought a Model T Ford for $467.50. It came in a boxcar on the O&W Railroad. After two days of instruction, he drove it on his own. He had to crank it to start it, and when he had a blow out, he had to jack the car up, patch the inner tube, and blow it up again with a foot pump. Fred drove the Model T for three summers on the RFD route, but for four months every winter he still had to use a horse.

Another horse Fred used on the RFD was named Roxy. He hired a livery horse every Thursday to spell her, but she made the trip five days a week nearly all winter. Some days he could use the horse part way, leaving her with someone while he made another loop through the fields and coming back again for her when he was done.

All of my grandfather’s story, one of my earliest writing projects, is now available from online booksellers. What follows are excerpts from the chapter in The Life of a Plodder: Fred Gorton’s 95 Years on the years he spent delivering the mail.

In 1912 or 1914 we had a big snow storm. I went out each day and made part of the RFD route on foot, or used the horse part way, leaving the horse with someone while I made another loop, coming back again for the horse. One time I left the horse tied at the bottom of the hill near S. Duberoff’s and walked to the Oliver Cooley place and left five patrons’ mail there, and returned to turn the horse around and go on Loch Sheldrake to serve some more patrons. This same winter I went in the fields off the road five times to serve the route. One day I walked maybe ten miles. The O&W train got through at Taylor’s Crossing and I got on and rode to Liberty, the only time I carried mail by train.

I drove my Model T Ford three summers over the RFD route, but never got stuck so bad as to have anyone help me out. But sometimes I had to get stones from the stone wall to block up the hind wheels when I got stuck. About four months in winter I used horses to make the trip. They didn’t plow the roads in those days. We generally had good sleighing from Christmas until March 15th or April 1st. I used a single horse. The staves was shifted so as to let the horse travel in the left side path as there was a comb between the two paths. 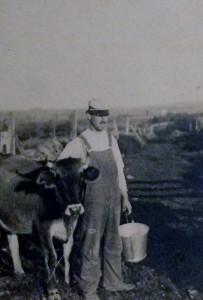 Fred in 1902, before he took the job with with post office

February 19, 1916: I served the RFD trip with difficulty. I upset twice in going to Clements’. Lost my horse feed in the field. Met Mr. Drennon at Clements’. Roxy the horse wouldn’t stand so I jerked her and broke the turret on the saddle of the harness. I arrived to Alvin Brown’s and the road was closed with a ladder so I put Roxy in his barn and put all the mail in the sack and traveled on to Cooley’s. It was 12:30 PM. I took dinner at Cooley’s and left eight patrons’ mail there. I went to Geo. Earl’s. There I met him with the ox sled below Max Keller’s place, breaking the road for me. It took forty-five minutes to reach Chas. Spitzer’s place from Tony Vantran’s. Next stop Myer Abramson. The bull pup came out and I called him a son of a bitch for chasing me. I went to Bonney’s Corner. Sold 20¢ of stamps to McIntosh up to the McIntosh School. Two boxes there and on to C. P. Berylson’s place to get signature for the special delivery letter for Mr. Kahn. They offered me coffee. [At]Bushlovitz I went in their house and cleared my felt boots of snow and ice. They offered me some tea but it looked like liquor in a glass. I took none. I passed on through Workman’s Circle to Howard’s place. Here I asked him to take Wm. Abplanalp’s mail to him. I had no mail for Abe Zeller so I went to Den Brock’s, box 102. Took a cup of tea there and then to Alvin Brown’s to get Roxy. They had unharnessed her and they hooked her up while I rested and visited with his wife. I got in Liberty Post Office at 7:05 PM so lame from walking I felt it for two days. I presume I walked seventeen miles over the route. Quite a long walk when one is used to riding. The snow was perhaps two feet deep.

March 9, 1916: I started over my trip on RFD. I skipped 11 to 16 but went to Mr. Robt. Smith’s box and returned to Joe Brown’s. Took dinner and left there just as the clock struck twelve. Thence to Crary’s and Newton Clements’. They offered me dinner. I got a signature for the special delivery at P.A. O’Malley’s (lived next to Nichols School) and when I got to J.R. Gerow’s she asked me to dinner and coffee and Jas. Wyncoop  asked me to eat. I stopped and took tea. Dewey Carr and wife also offered me dinner. Mr. Tripps was there. Also Dewey’s sixteen month little girl. Aaron Stanton met me halfway to the corner. Took his mail and Jas. Osterhout’s. I retraced back to Geo. Earl’s place. Mr. Earl was at Cooley’s Corner to meet me but I went past Earl’s to Arch Kirschbaum and Prince’s and Fred Vantran met me at the corner by Two Bridges and I gave him Levine Bros. mail, Kalmanson #72, also Chas. Spitzer. I turned for Liberty, went past Pshonick’s to Alvin Brown’s. Brown hooked up the cream colored horse while I went in their house and heard four phonograph records. They had a live hen in a pail with two sticks of wood to keep her in. She could stick her head out. I was taken to the post office by Elu, the son, with his covered sleigh. Otherwise I walked or ran all the way. It was 5:30 PM.

March 25, 1916: I went out in the field all these places to serve the RFD route: Crary’s road was blocked with snow from Mrs. Mary Simmons’ to Crary’s Corner; took the field at Morton’s to J.N. Clements’; went in the woods next to Martha Grant’s; next blockade was A.B. Stanton’s and Prince by Mauer’s Corner. Retrace to Seigel’s through Geo. Earl’s place; Prince place to Geo. Eltz, W.E. Porter. No road from the Rexford place. We went in the field to the left from Levine’s place through his barn yard to Tony Vantran’s; up in the field to Spitzer place; in the gully halfway to Abramson’s place; at the top of Nicholson’s Hill; in the meadow to the Workman’s Circle. Here we dash out of the road to the Cold Spring House. Four roads past Seiken’s we go into John Nicholson’s field, left past his barn, and come out at the bars. We cross Den Brock’s lot to the sand bank by Howard Rowe place, the last place in the field making twelve places apart from the regular road traversed by the RFD route from Liberty.

Grampa obviously believed in the words of the inscription on the main post office in New York City: “Neither snow, nor rain, nor heat, nor gloom of night stays these couriers from the swift completion of their appointed rounds.” The quote, incidentally, was adapted from Herodotus, who wrote: “The Persian messengers travel with a velocity which nothing human can equal . . . Neither snow, nor rain, nor heat, nor darkness, are permitted to obstruct their speed.”

With the publication of A Fatal Fiction, Kathy Lynn Emerson/Kaitlyn Dunnett has had sixty-two books traditionally published. She won the Agatha Award and was an Anthony and Macavity finalist for best mystery nonfiction of 2008 for How to Write Killer Historical Mysteries and was an Agatha Award finalist in 2015 in the best mystery short story category. She was the Malice Domestic Guest of Honor in 2014. Currently she writes the contemporary Liss MacCrimmon Mysteries and the “Deadly Edits” series as Kaitlyn. As Kathy, her most recent book is a collection of short stories, Different Times, Different Crimes, but there is a new, standalone historical mystery, The Finder of Lost Things, in the pipeline for October. She maintains websites at www.KaitlynDunnett.com and www.KathyLynnEmerson.com. A third, at A Who’s Who of Tudor Women, contains over 2000 mini-biographies of sixteenth-century Englishwomen.