We are now in the locked-in era of the daily briefing — they’re ubiquitous and they’re not going away soon. At least there’s a little something for everyone. I like the calm and rational updates by Maine’s Dr. Nirav Shah, with his trademark orange pen in hand and Diet Coke at his side. I love the way he cheerfully says the name of each reporter, as though they’re old friends he can’t wait to talk to. And as I’m writing this, he just chided himself for mixing metaphors. What’s not to like?

Then there’s the no-nonsense good old-fashioned Italian New York anger of Andrew Cuomo. I recently heard someone describe herself as a Cuomo-sexual. I love the way pandemics spur new phrases!

And, of course, there’s the surreal circus of you-know-who.

A little something for everyone.

Anyway, I know everyone’s a combinatoin of bored and jumpy, or overworked and jumpy, no matter your situation. So, I’m not going to get deep today, just a daily briefing of some random stuff that may or may not interest you. With photos.

My writing hasn’t been going great. I’m one of those lucky folks who still has a job, but it seems to be all-consuming these days and doesn’t leave much brain room for fiction writing, even the crime kind. That said, I had one of those nights last night where I couldn’t sleep because a scene for my book was hammering itself out in my head and I couldn’t stop it. I finally gave in and got up a few times to take notes. And they actually made sense this morning. So when that starts happening, it means the writing has to become a daily immersive thing. It won’t let me ignore it. 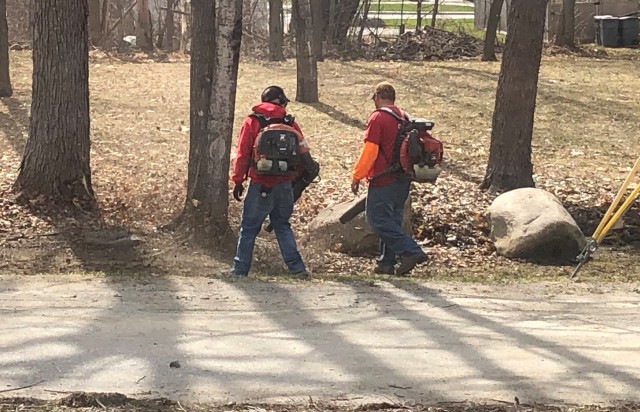 Lack of sleep, though, is not making me any more happy that apparently it’s essential work to have six guys blow the leaves at the house across the road for 90 minutes every week. And in one of those truly perverse Maine situations, the people who own the house are from somewhere else and are rarely ever there, even without stay-at-home orders. And the leaves are in a grove of trees that no one every uses. For anything. It used to at least be much thicker woods with a lot of songbirds and critters. And yeah, the leaf-blower crew used to come by weekly then, too. Because the last thing you want in woods is leaves on the ground. SO ESSENTIAL. SO VERY ESSENTIAL.

OK, another annoying thing now that I’m on a roll. When local reporters are patching in to Dr. Shah’s briefing, they really need to turn off the notifications on their computer, put their phone on “do not disturb” and put the cat and dog in another room. Seriously.

And before I get started on my stuff — I know how anxious you are — April 23 is World Book and Copyright Day. The 2017 U.S. Census County Business Patterns program counted 7,482 establishments as book stores and news dealers, down from 12,127 in 2007. Let’s hope the number’s back up by 2027. And what a world we live in now, where nonsensical air and noise-polluting leaf blowers in the woods for a house no one lives at is considered essential, but the powers that be can’t find a way to make bookstores work with social distancing rules. 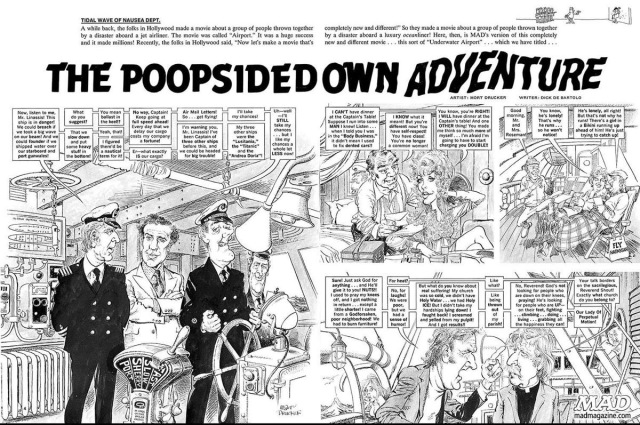 Speaking of essential, as writers, we’re often asked who our influences are. I’m not too proud to say Mad magazine definitely had an influence on me in my tween years. Irreverant humor was a very exciting discovery.  I was sad to see today that Mort Drucker, Mad’s legendary cartoonist, died the other day. The summer we moved to Maine, 1973, the Mad issue with Drucker’s “The Poopsidedown Adventure” lived in our car as we lived at campgrounds. By mid-summer my five siblings and I could recite Poopsidedown from the first frame to the last.

Almost $200… hmm, get heating oil for the nearly empty tank, or a cat tree?

One thing I’ve found myself doing as I watch all those briefings is scrolling through Amazon, Etsy and other places looking for things I might buy if I ever get my federal stimulus payment (YES I KNOW HOW TO GET IT. THANK YOU. Sorry. I’m a little jumpy. Blame the leaf blowers that just… won’t… stop. Going on hour two now). For some reason, I’ve started to think my cats need more stuff, things that that I never would’ve bought before. Like the above cat tree. I don’t believe I’ll actually buy stuff like that (if I ever get the money), but it’s fun to dream. Ditto for Zillow, the home sales site. Pick a town. See what’s for sale. Decide whether you’d buy it or not. And come on people, if you’re taking photos for a real estate site, at least take the dirty dishes out of the sink.

I’ve been able to add to my photo collection of libraries across Maine as I drive around looking for new places to go — while distancing, of course, and not going into stores or other establishments unless I combine a drive with the now-dreaded Hannaford trip. This weekend I drove out to the nether regions of Oxford County to see if there’s any sign, besides the miniscule town-square plaque in Andover, of the earth station where the first TV satellite was launched in 1962. While checking out the town, I came upon the Andover library. BTW, just like Ed Muskie’s childhood home in Rumford, aside from the plaque that’s nowhere near the spot, no sign of Earth Station Andover.

Speaking of going to far-flung places where I can get off the couch and get some fresh air while also avoiding people and leaf-blowers, I took some snaps to share. 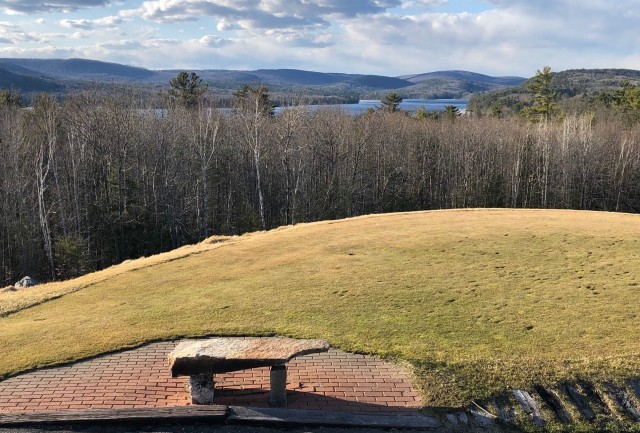 This view is usually reserved for golfers this time of year.

This is the summit at the Belgrade Lakes Golf Club, a very short walk from my house. From the top of the hill you can see two lakes. An awesome view, worth the climb.

There were a lot of rocks, and the one the sign is pointing to is not THE Curitis Rock. Just so you know and don’t think it’s all hype, no show.

The three-plus miles of trails at the Kennebec Land Trust’s Curtis Homestead Conservation Area in Leeds is quiet, uncrowded and relaxing, with some neat stuff. LIke the Curtis Rock, which is one of the many glacial erratics on the grounds. Pro tip: Land trusts and conservation areas, like those overseen by the Maine Woodland Owners, often have pleasant trails and no company. And with Wednesday being the 50th anniversary of Earth Day, it’s a great time to check some out and show the love. Personal note: This 246 acres was donated to the land trust by former Gov. Ken Curtis and his sister. I went to grade school with Curtis’ daughter, Angela. A really nice family.

The Hallowell quarry is a beautiful spot, with little sign that it was once THE teen hangout place for Augusta-area kids. Ah, the 70s…

Speaking of the old school days, I took a nice walk around the Hallowell quarry a week or so ago. The quarry was the hot swimming/party spot when I was in high school. A decade or so ago, someone began working it again and it was drained, but the owner is now selling it and it’s full of water again.

On a writerly note, it’s places like this that we Maine Crime Writers love. Get out and check out some places off the beaten path and see what you can find.

That’s it for today. I have some leaf blowers to throw dog poop at.

Stay healthy and take care until next time!

Maureen Milliken is the author of the Bernie O’Dea mystery series. Follow her on Twitter at @mmilliken47 and like her Facebook page at Maureen Milliken mysteries. Sign up for email updates at maureenmilliken.com. She hosts the podcast Crime&Stuff with her sister Rebecca Milliken.
View all posts by Maureen Milliken →
This entry was posted in Maureen's Posts and tagged bookstores, essential workers, Mad magazine, Maine, writing. Bookmark the permalink.