Stockpiling Inspiration like Acorns to Carry Us Through the Winter

How is it mid-November already?

I’m writing this on Veteran’s Day, eleven days into the eleventh month.  It was full-on dark outside my window at 4:30 this afternoon, which was just as well because it was spitting snow. We all know what snow in November portends, so let’s talk about crime writer conferences instead.

Murder by the Book took place last month, and New England Crime Bake happened this past weekend. Both offered lots of convivial interaction with other writers and plenty to think about over the winter.

Murder By The Book panel on the importance of setting at the Jesup Memorial Library in Bar Harbor, left to right, Moderator Josh Christie of Print: A Bookstore, Darcy Scott, me, Dick Cass and Sherry Harris, who just finished a stellar term as president of the national organization, Sisters in Crime.

Murder By The Book was the weekend of October 18-19, when the lovely folks at Bar Harbor’s Jesup Memorial Library hosted a gaggle of us at a conference that always balances insight with laughter.

Linda Greenlaw, who writes a mystery series featuring Detective Jane Bunker in addition to her well-known books about her fishing life (The Hungry Ocean, The Lobster Chronicles, All Fishermen are Liars) was the keynote speaker. Several members of this blog–Dick Cass, Bruce Coffin, Vaughn Hardacker, Barb Ross, Darcy Scott and me) were there, as were a number of other crime writers including national Sisters in Crime President Sherry Harris (author of the Sarah Winston Garage Sale Mysteries), Lynne Raimondo (whose three-book series featuring blind psychiatrist Mark Angelotti is marvelous), MCW alum and NYT best-selling author Julia Spencer-Fleming, (whose long-awaited next Clare Fergusson/Russ Van Alstyne Mystery, Hid From Our Eyes, will be out next April), Anne Canadeo (who writes the best-selling Black Sheep Knitting Mysteries) and Nicole Seavey, whose first novel will be out soon.

I didn’t make it down to Dallas for Bouchercon the weekend of October 31 – November 3, but several other MCWers were there, and I expect they will fill us in on the highlights sometime soon.

For those of you who do not know, the ‘Bake is an annual region-wide mystery writer confab outside of Boston co-sponsored by Sisters in Crime and Mystery Writers of America.

This year’s Guest of Honor was the brilliant Ann Cleeves, creator of Vera Stanhope and Jimmy Perez, the protagonists of her Vera and Shetland novels, which have led to a pair of hit British television series that go by the same names. (You can stream them through Acorn, Netflix and Britbox.)

Lori Rader-Day, the new president of Sisters in Crime, with Crime Bake Guest of Honor, the marvelous Ann Cleeves.

Ann spoke with great candor about her long career–she wrote in relative obscurity for twenty years before finally breaking out–and introduced us to her new series, set in North Devon and featuring Detective Matthew Venn. I devoured the first Matthew Venn book—The Long Call—and was keen to hear what inspired her to start a new series in a different part of England.

Ann mingled happily with the crowd, posed for countless photos and said with utter conviction one of the most wonderful things I’ve ever heard from a writer of her stature. If all of her success evaporated tomorrow, she’d continue writing, Ann said. The fame is nice, but it’s not what drives her to tell stories.

Crime Bake also featured many lively panels, formal and informal meetings with agents and editors, and a banquet where first-time authors were applauded, award-winning writers were recognized and the Lifetime Achievement Award was bestowed upon Hallie Ephron.

In addition, Barbara Ross offered a moving tribute to our departed and much-missed blogmate Lea Wait, whose final book Thread and Buried will be released posthumously on November 26 (just in time for holiday giving.)

In place of more words from me, here are some photos from Crime Bake, all taken by my inveterate camera-toting spouse, Diane Kenty. 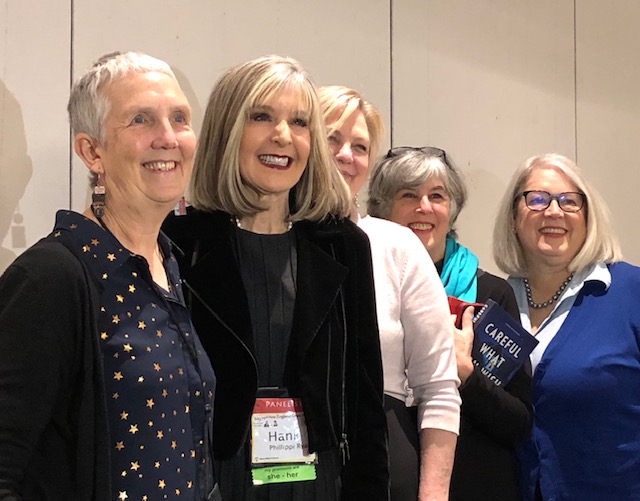 Sisters in Crime President Lori Rader-Day flew in from Chicago and my sisters-in-law Janice Asher and Chris Kenty journeyed by train from Philadelphia to attend Crime Bake.

At every crime writers’ conference, the bar is a central part of the action. Here’s a shot of an after-banquet gathering on Saturday night.