You ask about my experience with a comfort animal.

As you’ll recall, there was a lot of talk around the place during our brief institutionalization about the value of comfort animals. Frankly, I was inclined to see it as propaganda, aimed at making us believe there was a better life out there. Could a connection to another species really make such a difference in the quality of one’s life?

But, in spite of my misgivings, I went for it. Everyone said it was important to choose wisely, to go for one that was calm, devoted, apparently ready for attachment. I was surprised by the one I fell for. I’d been thinking small, dark and long-haired, but he was a big guy with salt and pepper hair, close-cropped. How often the objects of our affection are different than we expect.

I have to admit, he’s particularly adept at managing my anxiety. I used to be terrified of riding in the car, but with him by my side, I’m adjusting. At first, we had to stop at the Diary Queen for vanilla ice cream cones every time we went for a ride, but now he has me down to stopping only once a week or so.

I did have to spend a lot of time training him. In the beginning, he seemed barely aware of the continuous attempts to breach our defenses. Now he gets it. “It’s only the UPS guy,” he will say. “Or, it’s Cousin Roy, dropping off the beer.” The explanations don’t do much for me, but since these phrases are often accompanied by a treat and a belly rub, I let them go. 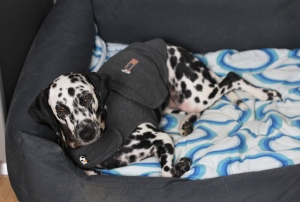 And, he’s great at handling the worst of my triggers, continuous loud noises. He puts me in the heavy vest and murmurs, “It’s only thunder,” or “It’s only fireworks.” I don’t know what comfort it’s supposed to provide, knowing whether the world ends by a natural cataclysm or one that is self-inflicted, but the distinction seems to make him feel better, so I calm down, too.

Doctors visits were a nightmare for me, but with him there, I can manage, though last time he let the doctor do something very, very unmentionable, for which I haven’t quite forgiven either of them. 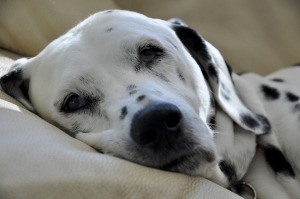 But in general, we get on well. We both love pizza, popcorn, and lying on the couch watching TV.  Each of us pushes the other to make sure we get plenty of sunshine and exercise, though he can be a little lazy. We work in some time to socialize with our own species, too.

In sum, I’d say, if you have a chance to get yourself one of these loving, generous creatures, you should go for it. Your life will only improve.

Barbara Ross is the author of the Maine Clambake Mysteries and the Jane Darrowfield Mysteries. Her books have been nominated for multiple Agatha Awards for Best Contemporary Novel and have won the Maine Literary Award for Crime Fiction. She lives in Portland, Maine. Readers can visit her website at www.maineclambakemysteries.com
View all posts by Barbara Ross →
This entry was posted in Barb's Posts. Bookmark the permalink.

8 Responses to My Comfort Animal