Night of a Thousand Bradys

Posted on February 12, 2018 by bereksennebec 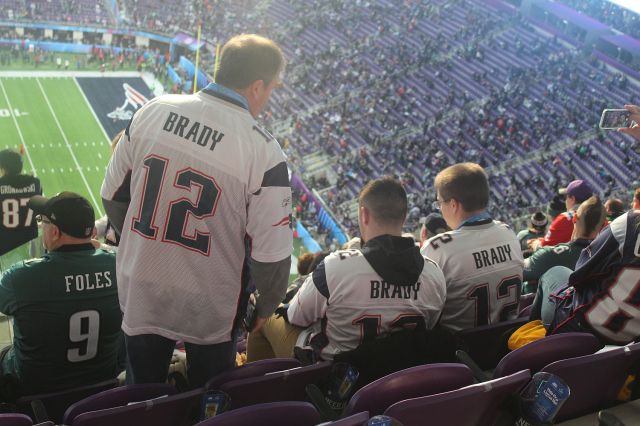 Last fall, Beth and I were entering the Frito-Lay They Win You Score Super Bowl Sweepstakes with codes from Pepsi caps. Each code entered gave you a team in the coming week’s NFL games. Every time you had a winner, you got a prize. We were playing for several things we thought would be useful or that would make good gifts for our nieces and nephews. 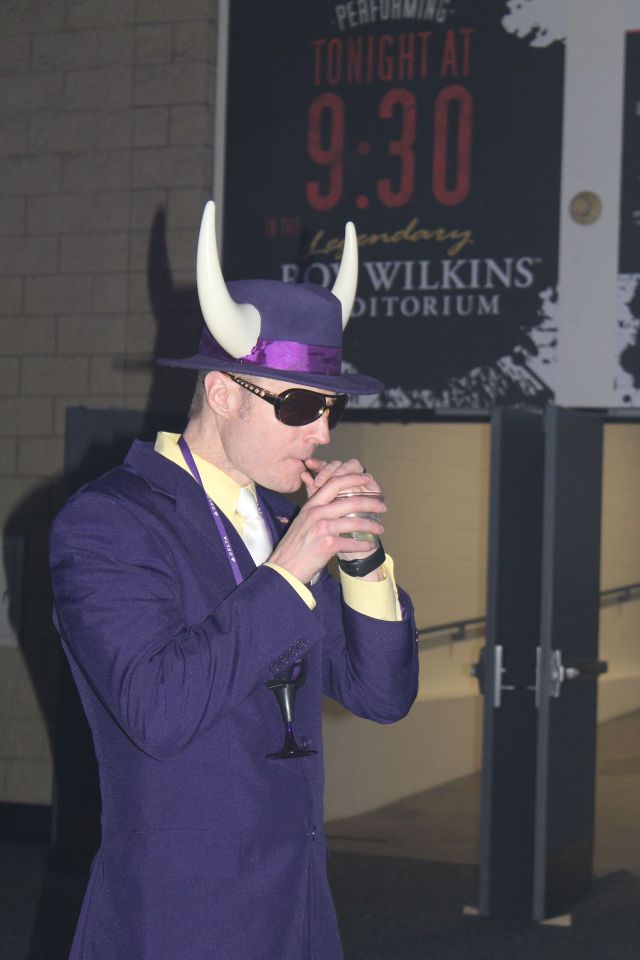 Minnesota might be cold, but fans there are COOL.

When Beth received an email alerting her to the possibility she was a weekly grand prize winner of a trip to Super Bowl LII in early October, we were at first shocked, then excited. Most sports fans I know have a super bowl trip on their bucket list. At that point, we had no clue who might be playing, but hoped the Patriots would be there…We got lucky. 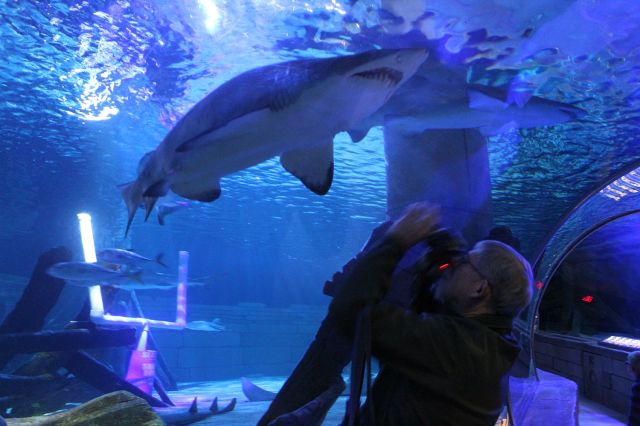 The aquarium has a wrap-around tank that’s wonderful

Caroline Southwick from GSE Live was responsible for planning our trip and did a stellar job. We had tickets from Bangor via Philadelphia to Minneapolis and back. (Little did we know who the Pats opponent was going to be) While we knew what was included in the trip, it wasn’t until we got the itinerary and event schedule, that the magnitude of what was about to happen hit us. 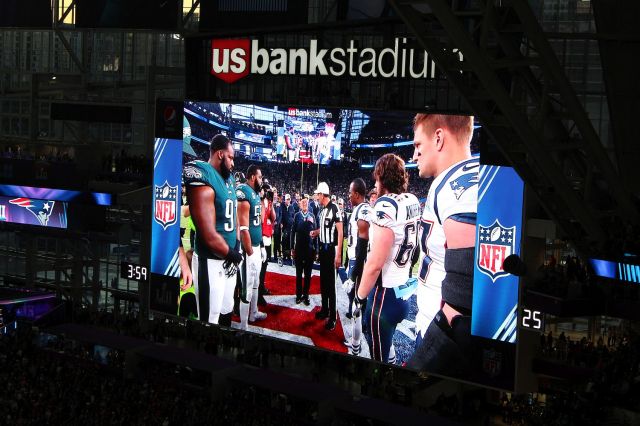 Coin toss before the game

It started when we changed planes in Philadelphia and green was everywhere. American Airlines embraced the Eagles, decorating the gates of planes heading to Minneapolis and handing out Eagles medallions and official NFL Eagles hand towels. Beth and I were the only Patriots fans on that plane and when I waved my Patriots gloves, we got a good natured razzing from everyone on the plane.

From the minute we arrived at the airport until we began our return home, both of us were impressed with two things. Everyone we met was amazingly outgoing and friendly, interested in us and eager to share information. The other was how well organized Super Bowl week was. Can you imagine ten thousand security personnel being unobtrusive? It happened in Minneapolis. There were also several thousand volunteers and everyone we encountered was committed to visitor safety and eager to show us where we needed to go. 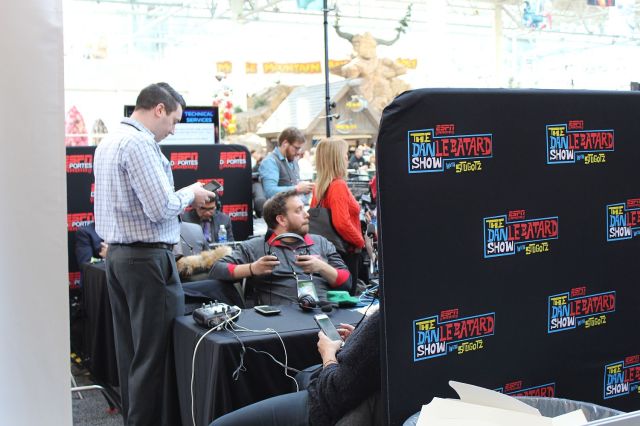 A peek at the media frenzy

My only lament is that we should have rented a car because our hotel was northwest of the city and we spent a pretty penny on taxi rides. After arriving Thursday afternoon, we settled in our room on the top floor and figured where we wanted to go on Friday. Since The Mall of the Americas was on my semi-bucket list and had an aquarium, we decided to spend our first block of free time there. It was interesting and totally unlike what I had pictured when thinking about it. The aquarium was excellent and we must have taken several hundred photos. In addition, we scoped out the media area on the third floor and I now understand the full meaning of ‘media circus.’ We bought more reading material at Barnes & Noble as well as giving Legoland and the Nickelodeon theme park a quick look-see.

Some of the rides at Nickelodeon

Saturday included two events, a meet and greet with players running from mid-morning until the afternoon and what turned out to be a double-barreled experience, the Taste of the NFL in the evening. (https://www.tasteofthenfl.com/) In its 25 year history, this evening of gourmet food and NFL stars has provided 200,000,000 meals for hungry Americans. 32 top chefs, one from each NFL city, were flown in to prepare and offer samples of their signature dishes. In addition, a current or former player from each team was there to sign autographs and pose with attendees for photo shoots. Every one we met was outgoing and enjoying things as much as we were. The highlight for me was meeting Curly Culp, former center for the Kansas City Chiefs. 50 years ago, I used to deliver pizza to him in when he lived in Best Hall at Arizona State University.

Patriots cheerleaders were in full force

Curly, your pizza’s getting cold

There was also a silent auction of pretty cool stuff, as well as a $100/ticket raffle for a diamond bracelet worn by Miss America who was there for the event.

Joe DeLamielleure, first round pick of the Buffalo Bills in 1973

Of course, the big event was Sunday afternoon. We, along with 36 other winners of Super Bowl trips offered by Pepsi, boarded buses where snacks and drinks were provided while we were transported to the stadium. Security was tight, but seamless and we were soon in our seats above the 20 yard line. The pregame was impressive with sixteen Medal of Honor recipients honored as part of the opening ceremonies. One of them flipped the coin to see who would choose to kick or receive. Everyone, regardless of their affiliation, was boisterous and enthusiastic. Each seat had a Bud Light glass with LED lights in the base. Every time a team scored, the glass lit up in Patriots blue or Eagles Green. 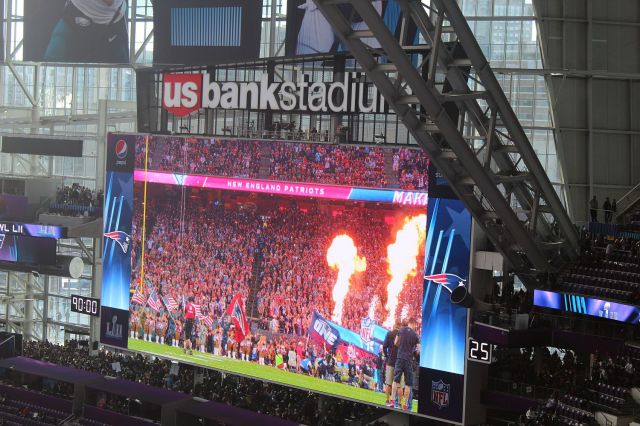 Half time was something to behold. Beth and I were impressed with the local youth involved with the pregame and halftime shows. Two seats to my right was a guy who had come from Windham for the game.

Part of the halftime extravaganza

You know the outcome, but the overall experience was everything anyone could want in a sporting event. Our seatmate on the return flight was in charge of coordinating the military flyover, made more challenging by doing so over a domed stadium. He said he used some of the same AI/VR technology used to guide smart bombs to keep the formation intact and did it from inside the stadium. Pretty impressive.

11 Responses to Night of a Thousand Bradys