Posted on January 30, 2018 by mainecrimewriters

After a hiatus, and surgery, Dorothy Cannell rejoins us this month

It’s insufficient to say I’m a dinosaur living in this ultra-techno age.  I’m whatever

came before Brontosaurus and his kith and kin.  I picture blobs of gray Jell-O with brains indiscernible under the most powerful microscope.  I don’t have a cell phone, let alone text or tweet. Doubtless the next thing will be twizzle and I’ll feel more alone than ever on an island the size of dinner plate. It’s not that I don’t approve of certain advancements. I have no wish that Thomas Edison had never been born. The advent of the vacuum cleaner was nice, also washing machines and dryers and sensible telephones; not ones that don’t stay in place rather than wandering all over house and pretending not to hear when summoned.

I excuse this attitude on all the period novels I read when young. I longed to have lived in an age of horse drawn carriages, evenings by candlelight enlivened by conversation in the manner of the Bennet family. Wayside inns with serving wenches in mobcaps bustling about with pewter tankards and loaded platters. Bewigged gentlemen sipping port or taking snuff.  Females sketching or tending their embroidery. I can’t draw or dig a needle in the right place on a piece of cloth, but the concept was pleasant. Later I tended to think that my growing era, the nineteen forties and fifties got it about right. Until I was about ten the milkman still came round in a horse and cart, as did the coalman and rag-and-bone man. We had the red telephone boxes, double decker buses, men in bowler hats and typewriters that minded their own business instead of big-headedly correcting spelling and punctuation.

Also, and of paramount importance, the medical profession had picked up its crawl out the dark ages. I don’t suppose leaches took kindly to being put out of work; I can hear them complaining, “There goes the family business after hundreds, possibly thousands of years – I guess it means we’ll be on the dole, Jimmy”. But who spared them a passing thought even when singing All Creatures Great and Small? Then there was the matter of braving the Dentist without seriously considering the alternative – taking a lethal dose of smelling salts. Back to the Tower of London for those instruments of torture. One could imagine a dreamy eyed Henry VIII fondling them before having the fellow who had clipped a leaf from many off the maze at Hampton Court dragged before him for a game of show and tell. As for the news that one requires an operation. How pleasant one need not have one’s leg amputated or necessary internal organ removed without being told to chew on a rag unless you preferred screaming to the point you’d never get your voice back and your eyes blown out of your head.

But even nostalgia for that era dimmed from gold to brass this past year when I started having back and arm pain and eventually was scheduled for neck spinal fusion surgery. In the past this would have been a bigger deal, but though people warned me to think carefully about being drastically chopped about and likely coming off worse than before, it wasn’t anything worth dreading. Although not laser, the incision was small and instead of stitches or staples closed with super glue. I was out of the hospital the next morning and my daughter, Shana, who had taken a couple of weeks off work to take care of me went to Mexico instead.

Am I still blob of pre-dinosaur gray Jell-O when it comes to personal participation in this to me science fiction world (I do prefer mysteries). But I do have appreciation for what medical science and rapid communication now offer. After I came out of surgery Shana and her partner texted all interested parties that I was fine and continued to keep them updated on other outlets of social media, whatever that entails. 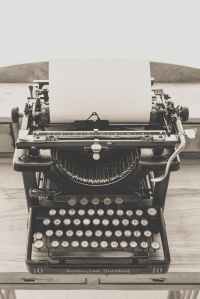 Still, enough is enough. I never wanted a dog or a cat cleverer than I, and certainly not a smarty-pants appliance telling me what to do. Now, I’m going to go and have a chat with my old manual typewriter on which I wrote three books without ever exchanging a cross word.

Good to be back,

This entry was posted in Dorothy's Posts, Uncategorized. Bookmark the permalink.