Posted on February 3, 2017 by mainecrimewriters

It was an absolute blast, the tonic we all needed on a cold January night.

The program. A keepsake, for sure.

Several of the actors are professionals—members of Actor’s Equity Association—who are Portland Stage Affiliate Artists. The others possess impressive resumés from their work at Portland Stage and other area theaters. To a person, they did a superb job.

Julia, who studied theater as an undergraduate, observed after the performances that a staged reading is a true test of an actor’s chops. Without costumes, props or sets, the audience is fully focused on the actors and their ability to inhabit the characters. And inhabit they did.

Yours truly with Actor Whip Hubley, who read the parts of both my newspaper reporter protagonist Joe Gale and Julia’s police chief Russ Van Alstyne during the staged readings.

I can’t even describe the thrill I felt when the actors read the words I’d written, and how rewarding it was to hear the audience react. It was equally exciting to watch the actors perform passages written by Gerry, Paul, Julia and Chris, four writers I hold in the highest regard.

As writers, the task of preparing scenes for submission was a lesson on the difference between writing for readers and writing for performers. We were asked to submit two or three 10-minute-long, dialogue-heavy passages for the director’s consideration, each with two or three characters.  The work needed to be adapted for the stage by trimming out the words, phrases and sentences that would bog down the dialogue. It was a bit of a challenge to adopt a different mind-set, but the payoff was tremendous.

Enormous thanks go to Director Eileen Phelan, who proposed the idea of staged readings back in November. Her discerning choice of scenes and skill matching actors to parts was critical to the evening’s success.

Chris Holm had us all cracking up during the post-performance discussion with the audience.

Bess Welden of Portland Stage, who acted in Paul’s and Julia’s scenes, also did a great job moderating the post-performance discussion with the enthusiastic and engaged audience.

This was the second collaboration between local crime writers and Portland Stage.  Last year several authors took part in an audience talk-back after a production of PSC’s The Hound of the Baskervilles. This week’s staged readings took the relationship a step further, and there’s already talk about doing it again next year so more crime writers can experience the thrill of watching their characters come to life on stage. 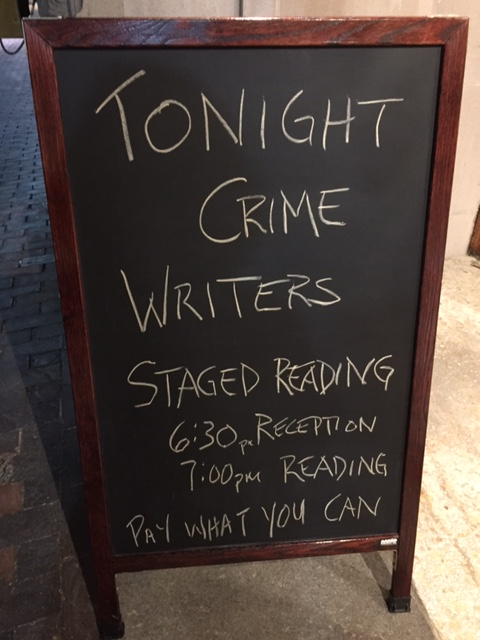 This entry was posted in Brenda's Posts and tagged Eight Pounds, One Was a Soldier, Portland Stage Company, Quick Pivot, Staged Readings, Straw Man, The Poacher's Son. Bookmark the permalink.