How to Launch a Book on a Budget

Posted on October 21, 2016 by jenbloodauthor 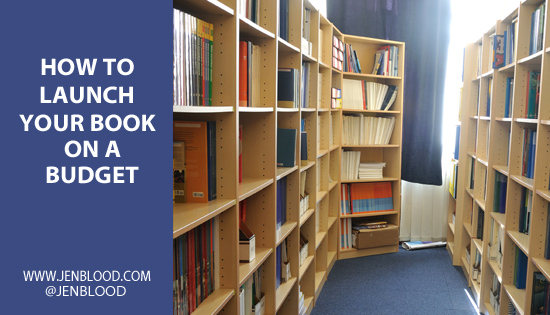 Whether you’re an author with a traditional publishing company or you’ve elected to go it alone, I don’t think it’s really a surprise that budgets are tight when it comes to promotions and marketing these days. Unless you are one of the chosen few star players for a traditional imprint, many of the costs for launching your book may fall on your shoulders. And, of course, if you’re an indie working on a shoestring budget (and who among us isn’t?), then everything is pretty much on you. Since I’ve been working as an indie author for almost five years now and am preparing to launch a new series, I thought now would be a good time to share my own launch process for this latest novel.

First, a little about what I’m doing. My new Flint K-9 Search and Rescue series features characters from my bestselling Erin Solomon series – so I’m essentially doing a spinoff with some of my strongest characters. The first book in the series, The Darkest Thread, is out officially on October 25.

In today’s digital-savvy world, pretty much everyone you talk to in publishing is all about the almighty mailing list. I have a mailing list of about 3,000 subscribers at this point. In my August newsletter to those subscribers, I put out a general call asking for readers who would be willing to review the new book if I provided them with an advance review copy (or ARC, as it’s known in the business). Because authors’ careers are made or broken based on the number of reviews they have on Amazon and Goodreads these days, the advance reader team is a critical component in the launch process.

I ended up with a team of 75, with which I’m very happy. I sent out personal messages to everyone who responded as their emails came in, and then sent out an official welcome on September 15 through Mailchimp. I had 75 promotional codes for my audiobooks through ACX (the Amazon company I go through to distribute my Erin Solomon audiobooks), so was able to let everyone on the mailing list choose one of the first three audiobooks in my series, as a special perk for being on the advance reader team.

On October 6, my ARC was ready to send to the advance reading team. I use BookFunnel as the easiest way to distribute free books, as readers can choose the format that works best for them depending on the ereader they use. In the email I sent on October 6, I provided a timeline for when I would like the book review up; reiterated the fact that I was not looking for solely positive reviews, but rather am looking for fair, honest reviews about the readers’ perceptions of the novel; and asked each reviewer to please include a disclaimer at the beginning of the review per Amazon guidelines, in order to make sure we weren’t violating their rules. That process got a little muddy as Amazon has just changed those guidelines, but ultimately it was determined that the best disclaimer to use at this time is: DISCLOSURE: I received an ARC of this novel at no cost to the author.

While the advance reader team was at work, I was busy prepping everything else. I posted the book for print pre-order on Amazon, posted the details of the book on Goodreads, and got digital pre-orders up on Barnes & Noble and Kobo, as well as preparing the book for release on Amazon and Draft2Digital (which distributes my books to the iStore for me, since I don’t have a Mac). Though you can do digital pre-orders on Amazon, I unfortunately got turned around with the mechanism at my last book launch, so it’s not actually available to me for the next year. Because sometimes Amazon is punitive; let that be a lesson to you.

On October 10th, I announced a dog photo contest to be held the day of the book launch, on October 25th. Since the book is about dogs, and I love dogs, and election season is horrible and all I really want to look at are happy, smiling dog faces, this seemed a good idea.

I didn’t invest extra money in promoting the contest far and wide, and instead just relied on my social network on Facebook, Twitter, and through my mailing list. About fifty people submitted photos, which I think is a great turnout while still being manageable for me. I posted all of those photos in a Facebook photo album, and every ‘like’ each photo receives counts as a vote for that dog. The grand prizes for the contest are two $25 Amazon gift cards and a Kindle Paper White, but everyone who enters will win something. I’ll be taking submissions for the photo contest until 5pm EST on Friday, Oct 21st, and judging will take place during an online Facebook Launch Party I’m hosting between 2 and 9 p.m. on Tuesday, October 25th.

During the launch party, I’ll be giving out prizes, taking questions about dog training (I’m a certified trainer myself and have my trainer/mentor on standby to lend a hand with the heavy lifting when I’m uncertain about anything), sharing excerpts and extras from the novel, and drinking lots of wine. Because that’s what you do when you’re online for seven hours pimping your work.

It’s free to host an event on Facebook, and posting the album of dog photos for the contest is likewise free. You can opt to ‘boost’ the post and tailor your target audience accordingly if you’re comfortable with Facebook ads and have a budget to work with – depending on your prowess, I’ve heard this can be quite effective. That depends largely on how extensive your existing social media audience is, and just how many people you’re trying to reach. Realistically, I didn’t think I could handle much more than 50 entries in the photo contest anyway, so I’m very happy with my results.

As far as the sequence of everything else goes, I’ll be doing a ‘soft launch’ of The Darkest Thread over the weekend in order to work out any kinks and allow advance readers the opportunity to submit their reviews before the wide release on October 25th. I’m also running a cross promotion of my 5-book Erin Solomon box set (digital only), selling that set for an unprecedented (and possibly insane) $.99 from October 24th to the 30th. I have a BookBub deal to promote that on the 29th, and am doing other paid advertising with Booksends, Books Butterfly, and JustKindleBooks.

WHAT DOES ALL OF THIS DO?

Most folks agree these days that—again, unless you’re one of the chosen few sitting in the winner’s circle with the Big 5 traditional publishers—the launch of a book is rarely going to set the world on fire. Rather, it’s a slow and steady race over time. You still want to make some impact up front, however, and the better positioning you can give your novel from the very start, the better chance that you’ll pick up momentum sooner rather than later. Personally, I just crunched the numbers and have $2,759.04 invested in this book, including the promotion for the Erin Solomon box set, cover design and editing for The Darkest Thread, SWAG for online and in-person giveaways, and print book stock.

I’m selling the book online at just $3.99 for the first week, and then will increase the price to its regular $5.99 on October 31st. That means I have to sell roughly 988 digital copies or around 310 print copies, in order to break even. Which is doable, but certainly requires some work on my part. My hope is to do that by October 31st so that anything I earn going forward puts me back in the black. Still, all of this is a scary prospect. I’ve now launched seven books, most of them with pretty good success, but I still find myself lying awake at night crunching numbers and praying to the publishing gods that things will go off without a hitch and my book will earn good reviews and equally good sales numbers.

Now, I know what you’re thinking… “But, Jen, I don’t actually have 2700+ dollars to spend on a book launch.” I hear you. So, here’s how I prioritize when I’m working with a smaller budget:

So, that’s my advice on the almighty book launch. If you’re an author, what have you found that works well for you when launching a book? And if you’re a reader, do you pay attention to book launches, or are you more likely to pick up a book after it’s generated some buzz?

18 Responses to How to Launch a Book on a Budget