The Dog in the Room

Posted on September 28, 2016 by mainecrimewriters

Dorothy Cannell: I currently have on my refrigerator a photo of an eleven-day-old

Not Dorothy’s puppy, but another dog eager to become someone’s pet

Cavalier King Charles puppy, eyes still sealed shut and a bald nose. His name is Watson. I know that because I chose it after asking my dog loving daughter-in-law, Cindy, to search on line for a reputable breeder. Mission accomplished when she found one in Connecticut with a female expecting a litter. Last Sunday afternoon Cindy brought round the photo along with another of the mother as a puppy, delightedly she informed me Watson should be ready to bring home in eight-weeks-time again. After positioning the photo and stepping back to yearn over it, I was filled with the belief that life had acquired a wonderful new dimension. The dampening question was: would this view be fully shared by rest of the household?

I broke the news of the soon-to-be bundle of joy to Teddy our ten-year-old Cavalier and Simeon our two-year-old Siamese cat, and neither threatened to pack their bags and leave in protest. Teddy enjoys being with his own kind, and Simeon thinks he’s a dog – coming when called, sitting up to beg for treats, and following my husband Julian and me from room to room in terror of never seeing us again. I had counted on a positive response from the four footed members of the family, but knew not to expect leaps of joy from Julian.

When I broached the subject of a getting puppy several months ago, he was flatly against it. At that time we had a second cat (sadly she died recently of old age) and he said we had enough pets, also he didn’t want to go through the bother of house training, but he did finally threw up his hands and agreed. The fair and sensible thing for me to have done would have been to let him know I’d put Cindy on the search, but I persuaded myself it was best not to ripple the waters until there was something to report. And now here I was feeling defensive, torn between righteousness and guilt.

What does this personal anecdote have to do with writing? It’s an answer to the question: “Do you draw upon the traits of people you know when creating characters?” There are moments when I listen to people talking and observe their behavior, and wonder: do you ever think how unappealingly you would come across in a book?” In the situation above would that person be the husband crushing his wife’s spirit, draining all the joy out of life? Or would she be the unsympathetic one – sneaky, manipulative, intent on having her own way, never considering the wants or needs of others?

The husband doesn’t flesh out, but there is meat on the wife’s bones. Where better to mine for unlikeable traits than within myself? I have a place for her in my next book. I shall call her Mildred because she has emotionally mildewed over the years. Of course I’ll change her physically, so I won’t risk having to sue myself.

As for Julian’s reaction to the Watson revelation? It was cheerful. He said he looked remarkably intelligent for eleven-days-old and it should be elementary to housetrain him. That’s the thing about characters in books – they should always be able to surprise us. I’ll have to find out how Mildred can do that for me… she must have some nice qualities. Maybe, as I said to Simeon, she likes cats. Siamese ones. 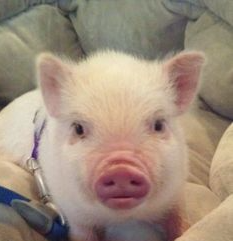 That’s it for now, I have to exclaim enthusiastically over the miniature pig someone with a name beginning with ‘J’ insisted on getting, saying he felt entitled to a pet of his own. Some of us should really listen to ourselves once in a while.

This entry was posted in Dorothy's Posts. Bookmark the permalink.

8 Responses to The Dog in the Room