Posted on January 13, 2016 by mainecrimewriters

Vaughn C. Hardacker here returning to True Crime: January 15th will mark the 69th anniversary of what is possibly the most renowned unsolved murder case of the 20th Century United States: The Black Dahlia. Her body was found mutilated, her body sliced in half at the waist, on January 15, 1947, in Leimert Park, Los Angeles, California. Short’s murder has been the source of widespread speculation, leading to many suspects, along with several books, television and film adaptations of the story. Short’s murder is one of the oldest unsolved murder cases in Los Angeles history. So, who was The Black Dahlia and what does she have to do with crimes in New England?

The Black Dahlia was Elizabeth Short born July 29, 1924 (22 years old at the time of her death) in Boston, Massachusetts, the third of five daughters of Cleo and Phoebe May (Sawyer) Short. She grew up in the suburb of Medford, Massachusetts. Her father built miniature golf courses until the 1929 stock market crash, when he lost most of his money. One day in 1930, he parked his car on a bridge and was not heard from for years, leading many to presume he had committed suicide. Phoebe May Short moved her family into a small apartment in Medford and went to work as a bookkeeper to support them. It was not until a letter of apology was received that the family learned Cleo Short was still alive, and living in California.

Because she was troubled by asthma and bronchitis, Elizabeth Short was sent at age sixteen to spend the winter in Miami. During the next three years, she would live in Florida during the cold months and spend the rest of the year in Medford. When she was

nineteen, she traveled to Vallejo, California, to live with her father, who was working at the nearby Mare Island Naval Shipyard on San Francisco Bay. Early in 1943, Short and her father moved to Los Angeles, but she left him following an argument, and took a job at the post exchange at Camp Cooke (now Vandenberg Air Force Base), near Lompoc, California. She soon moved to Santa Barbara, where she was arrested on September 23, 1943 for underage drinking (the photo to the left is her arrest photo). The juvenile authorities sent her back to Medford, but she returned instead to Florida, and made only occasional visits to Massachusetts.

While in Florida, Short met Major Matthew Michael Gordon, Jr., a decorated United States Army Air Force officer then at the 2nd Air Commando Group, where he was training for deployment to the China Burma India Theater of Operations. She told her friends that he had written to propose marriage while he was recovering from injuries from a plane crash in India. She accepted his offer, but Gordon died in a second crash on August 10, 1945, less than a week before Japan’s surrender ended World War II.

Short returned to Los Angeles in July 1946 to visit Army Air Force Lieutenant Joseph Gordon Fickling, whom she knew from Florida. Fickling was stationed at NARB, Long Beach. Short would spend the last six months of her life in southern California, mostly in the Los Angeles area.

On the morning of January 15, 1947, the nude body of Elizabeth Short was found in two pieces on a vacant lot on the west side of South Norton Avenue midway between Coliseum Street and West 39th Street in Leimert Park, Los Angeles. Local resident Betty Bersinger discovered the body about 10:00 am, as she was walking with her three-year-old daughter. Bersinger at first thought it was a discarded store mannequin. When she realized it was a corpse, she rushed to a nearby house and telephoned the police.

Short’s severely mutilated body was completely severed at the waist and drained entirely of blood. The body obviously had been washed by the killer. Short’s face had been slashed from the corners of her mouth to her ears, creating an effect called the Glasgow smile. Short had several cuts on her thigh and breasts, where entire portions of flesh had been sliced away. The lower half of her body was positioned a foot away from the upper, and her intestines had been tucked neatly beneath her buttocks. The corpse had been “posed,” with her hands over her head, her elbows bent at right angles, and her legs spread apart. Detectives found a cement sack nearby containing watery blood. There was a heel print on the ground amid the tire tracks.

An autopsy stated that Short was 5 feet 5 inches (1.65 m) tall, weighed 115 pounds (52 kg), and had light blue eyes, brown hair, and badly decayed teeth. There were ligature marks on her ankles, wrists, and neck. The skull was not fractured, but Short had bruises on the front and right side of her scalp, with a small amount of bleeding in the subarachnoid space on the right side, consistent with blows to the head. The cause of death was determined to be hemorrhaging from the lacerations to her face and shock from blows on the head and face.

Following Short’s identification, reporters from the Los Angeles Examiner contacted her mother, Phoebe Short, and told her that her daughter had won a beauty contest. Only after prying as much personal information as they could from Mrs. Short, did the reporters tell her that her daughter had been murdered. The newspaper offered to pay her air fare and accommodations, if she would travel to Los Angeles to help with the police investigation. That was yet another ploy, since the newspaper kept her away from police and other reporters to protect its scoop. William Randolph Hearst’s papers, the Los Angeles Herald-Express and the Los Angeles Examiner, later sensationalized the case: the black tailored suit Short was last seen wearing became “a tight skirt and a sheer blouse,” and Elizabeth Short became the “Black Dahlia,” an “adventuress” who “prowled Hollywood Boulevard.”

On January 23, 1947, a person claiming to be the killer called the editor of the Los Angeles Examiner, expressing concern that news of the murder was tailing off and offering to mail items belonging to Short to the editor. The following day, a packet arrived at the Los Angeles newspaper containing Short’s birth certificate, business cards, photographs, names written on pieces of paper, and an address book with the name Mark Hansen embossed on the cover. Hansen, an acquaintance at whose home she had stayed with friends, immediately became a suspect. One or more others would write more letters to the newspaper, signing them “the Black Dahlia Avenger”, after the name given Short by the newspapers. On January 25, Short’s handbag and one shoe were reported seen on top of a garbage can in an alley a short distance from Norton Avenue. They were finally located at the dump. 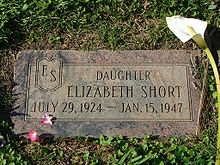 The Grave of Elizabeth Short

Due to the notoriety of the case, over the years more than 50 men and women have confessed to the murder, and police are swamped with tips every time a newspaper mentions the case or a book or movie is released about it. Sergeant John P. St. John, a detective who worked the case until his retirement, stated, “It is amazing how many people offer up a relative as the killer”.

Short was buried at the Mountain View Cemetery in Oakland, California. After her sisters had grown up and married, Phoebe Short moved to Oakland to be near her daughter’s grave. She finally returned to the east coast in the 1970s, where she lived into her nineties.

This case has always intrigued me and has been the subject of many rumors, books, and movies. It was the inspiration for my upcoming novel, THE BLACK ORCHID (March 1, 2016 from Skyhorse Publishing, Inc.). In a future posting I will talk about some of the suspects and theories of the crime.

3 Responses to THE BLACK DAHLIA