Crossing a bridge in Dover-Foxcroft loosened up a plot conundrum. And it was pretty too!

You may have seen the clickbait “news” last year that Dover-Foxcroft is supposedly the “most boring” town or city in Maine. It was apparently based on the fact that it has the oldest median population, combined with lack of population blah blah blah.

So, in other words, few people and old people make for boring. Do with that information what you will.

As far as I’m concerned boredom can be directly related to the person feeling it, no matter what their surroundings. As my mom used to say, “If you’re bored, I can find something for you to do.”

The reason Dover-Foxcroft is in my thoughts is because I’m there. I’m taking a writing vacation in the heart of my book-in-progress’s setting. (And thanks, too, to a discount for Mainers designed to make up some of the lost income from COVID-19 restrictions).

I’m not bored at all. Not one bit. First of all, because it’s a beautiful spot in a beautiful part of the state and there’s nothing boring about it.

More importantly, I’m never really bored when I’m allowed to be alone with myself and my thoughts and doing what I want. Boredom comes from having to deal with other people’s stuff that doesn’t interest me. And, most importantly, I’m immersed in the area where my book takes place. Everything I see and do is fodder for my writing.

I went on a walk yesterday to a local cemetery to get ideas for character names. Any writer out there knows how hard it is to come up with names, and I find that getting names from local cemeteries not only lends authenticity to a book, but keeps me from having to think too hard when I can be using my brain for other things. 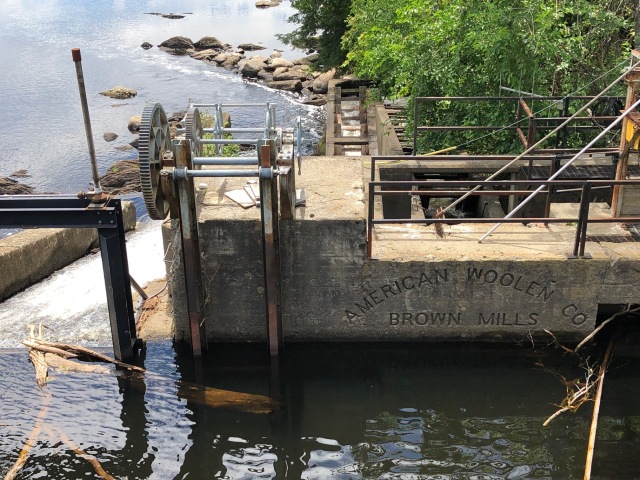 On the way, I walked over a bridge over the Piscataquis River that overlooked an old dam and its works. I’d been struggling with a specific plot point, and seeing that dam, its locks, fish ladder and more, gave me a plot epiphany. You’ll have to read the book to find out what it is. 🙂

I’m also near the Piscataquis County courthouse and jail, which play a small, but significant, part in the book. I probably look suspicious walking around the block taking photos of things like the jail parking lot, but as long as they don’t snap the cuffs on me, having those photos is going to help with my scenes.

I know that, if I’m lucky, the huge majority of the people reading my book won’t know the Piscataquis County Jail from the Alamo, and some would wonder why it’d be necessary to describe it so carefully. Particularly when what will go on in it in my book is far from what likely goes on in it in real life.

But it’s not so much about being sure the details are right as seeing a solid manifistation of my ficitional world. That not only goes for the jail and courthouse, but everything around me. The town my book takes place in is fictional, but being here make sme feel like I’m actually in the pages.

Spending some time in your setting not only helps you add small details you may not think of otherwise, but also will spur bigger ideas about plot and character you also may not have thought of.

I know everyone can’t go to the setting of the book they’re working on, but if you can, I highly recommend it.  And I promise, no matter where it is, you won’t be bored.

Maureen Milliken is the author of the Bernie O’Dea mystery series. Follow her on Twitter at @mmilliken47 and like her Facebook page at Maureen Milliken mysteries. Sign up for email updates at maureenmilliken.com. She hosts the podcast Crime&Stuff with her sister Rebecca Milliken.
View all posts by Maureen Milliken →
This entry was posted in Maureen's Posts, Uncategorized and tagged Dover-Foxcroft, mystery writing tips, settings in fiction. Bookmark the permalink.

6 Responses to Hey writers, there’s no excuse for boredom