A Prohibition Primer by Maggie Robinson

Hello again! Kaitlyn Dunnett/Kathy Lynn Emerson kindly invited me to stop in to talk about my second 1920s-set Lady Adelaide Mystery, Who’s Sorry Now? It comes out tomorrow, a Saturday, which is weird, but I’m not in control, LOL.

That’s a super-understatement. At the moment I’m juggling the sale of my house, revisions for Book 3, and promotion of Book 2. How I’d love to go dancing and drinking and debauching like the Bright Young People who feature in Who’s Sorry Now?, but I probably couldn’t stay up that late. After reading what young men and women got up to during the Roaring Twenties, I don’t think I was ever young enough! Frenetic, frenzied fun was sought at all costs, making my college years seem like a sedate tea party. Themed events were big, the wackier the better—adults in diapers and baby bonnets with gin in their bottles, for example. Yikes. 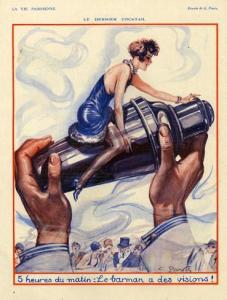 This was the decade of the cocktail. Some say sweet, fruity drinks were invented to disguise the taste of illegal homebrewed alcohol, which could send you to the hospital if it didn’t send you to jail. Some liquids were so toxic they caused hallucinations, paralysis, and even death. “The real McCoy” means quality, and comes from Captain Bill McCoy smuggling premium rum from the Caribbean that wouldn’t kill you, just Jamaican Me Crazy.

Lady Adelaide doesn’t have to worry about Prohibition, though—the UK was mostly free from the terror of the temperance movement, although plenty of British people signed “The Pledge.” And throughout London, private clubs sprang up to get around the strict licensing laws. If you belonged to my fictional Thieves’ Den in Soho, you might order F. Scott Fitzgerald’s favorite libation, a Gin Rickey at any time of the night without worrying about being arrested. (But you might get poisoned, because that’s the plot!)

My father came of age in the late Twenties, and one of his favorite drinks was a French 75. The original recipe called for gin, but he liked to substitute cognac.

I’m afraid I’d know who’s sorry now if I tried either of them, but let me know if you’re tempted. Thanks so much to the Maine Crime Writers for hosting me! To read blurbs and first chapters of Nobody’s Sweetheart Now and Who’s Sorry Now?, please visit www.maggierobinson.net 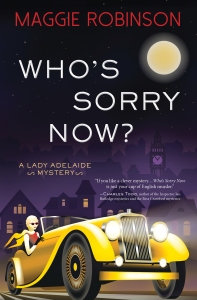 Maggie Robinson is a former teacher, library clerk, and mother of four who woke up in the middle of the night, absolutely compelled to create the perfect man and use as many adjectives and adverbs as possible doing so. A transplanted New Yorker, she lives with her not-quite perfect husband in Maine, where the cold winters are ideal for staying inside and writing historical mysteries and romances. A two-time Romantic Times Reviewers’ Choice nominee, her books have been translated into French, German, Portuguese, Turkish, Russian, Japanese, Thai, Dutch and Italian. Maggie is a member of Sisters in Crime, the Romance Writers of America, and Maine Romance Writers.

6 Responses to A Prohibition Primer by Maggie Robinson