Finally A Light At The End Of The Tunnel 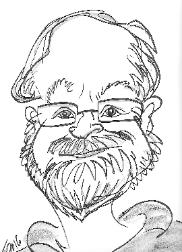 Vaughn Hardacker here: As I write this I am looking forward to setting the clock ahead one hour! I suffer from Seasonal Affective Disorder (better known as Seasonal Depression) and this winter has been possibly the worst (defined as longest) that I can remember. We got our first snow on October 18 and, unlike most years, it stayed with us; add to that a cumulative snowfall of 152 inches (we are forecasted to get another five inches on Monday and Tuesday, March 11 & 12). Considering that we usually get snow through mid-April we could set a new all-time record

For years I’ve been told that I suffer from S. A. D. but never really understood what it was. All I knew was that I hated winter (truth be told, I still do) and for many years made a point of never returning to Maine from November to June. In 2009 I returned rationalizing that snow and cold are only a problem if you have to go out in it–and as a retiree I could stay inside as much as I liked. I did not account for one thing . . . a phenomenon we call cabin fever.

I researched Seasonal Depression (S. A. D.) and here’s what I’ve learned

While the exact causes of SAD are not known, some scientists think that certain hormones made deep in the brain trigger attitude-related changes at certain times of year. Experts believe that SAD may be related to these hormonal changes. One theory is that less sunlight during fall and winter leads to the brain making less serotonin, a chemical linked to brain pathways that regulate mood. When nerve cell pathways in the brain that regulate mood don’t function normally, the result can be feelings of depression, along with symptoms of fatigue and weight gain.

SAD usually starts in young adulthood and is more common in women than men. Some people with SAD have mild symptoms and feel out of sorts or irritable. Others have worse symptoms that interfere with relationships and work.

Because the lack of enough daylight during wintertime is related to SAD, it’s less often 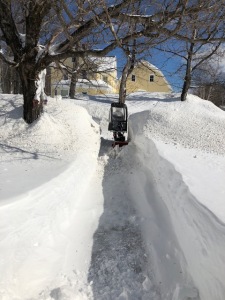 found in countries where there’s plenty of sunshine year-round.

People with SAD have many of the normal warning signs of depression, including:

If you’ve been feeling depressed and have some of the above symptoms, see your doctor for an assessment. He or she will recommend the right form of treatment for you.

There are different treatments, depending on the severity of your symptoms. 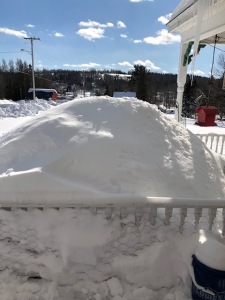 The View From My Front Porch

Traditional antidepressants are often used to treat seasonal depression.  Bupropion XL (I use this, it was sold as an aid to quit smoking under the brandname Ziban) is currently the only medication that is FDA-approved specifically to prevent major depressive episodes in people with SAD.

Many doctors recommend that people with SAD get outside early in the morning to get more natural light. If this is impossible because of the dark winter months, antidepressant medications or light therapy (phototherapy. I have a special lamp provided by the VA and it does seem to help somewhat; however sunlight works best for me.) may help.

In closing, I’ve been at a number of writing events where people ask “Why are there so many writers in Maine?”. I’ve heard several writers say: “The winters are long.” I understand where these people are coming from, but if, like me, you suffer from S. A. D. you may find the winter months to be your least productive. It’s now half-past March and May is a mere six weeks (seems like months) away and finally I can finally see the light at the end of the tunnel!

By the way . . . anyone know of a place with Maine summers and Arizona winters?

Vaughn C. Hardacker has completed five novels and numerous short stories. He is a member of the New England Chapter of the Mystery Writers of America and the International Thriller writers. Three times he has been a finalist in the Maine Literary Awards Crime Fiction category, SNIPER, in 2015, THE FISHERMAN in 2016, and WENDIGO for the 2018 award. The second installment of his Ed Traynor series, MY BROTHER'S KEEPER was released in July 2019 and is available through all major booksellers. A signed copy can be ordered directly from Vaughn (vhardacker@gmail.com). THE EXCHANGE his next crime/thriller will be released on September 4, 2020. He is a veteran of the U. S. Marines and served in Vietnam. He holds degrees from Northern Maine Technical College, the University of Maine and Southern New Hampshire University. He lives in Stockholm, Maine.
View all posts by Vaughn C. Hardacker →
This entry was posted in Vaughn's Posts and tagged Maine winter, S. A. D., Seasonal Depression. Bookmark the permalink.