Lea Wait, here. When I think of my grandparents, especially my grandmother, I think of her gardens. In her home in 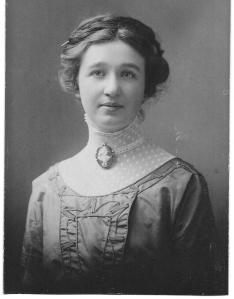 My Grandmother, when she was 22

Roslindale, Massachusetts, where I spent some of my earliest years, she had a wonderful large rectangular rose garden, with a circular brick path in the middle that I loved to run around. I also loved to fill jars with the Japanese beetles that ravaged those roses – and pull off their legs.

So — her garden wasn’t entirely a romantic experience. At least for the Japanese beetles.

After my grandfather retired, my grandparents shared a home with my parents in New Jersey in the winter months, but, in the summer, they all shared the home in Maine where I live now. My grandparents would head for Edgecomb as soon as they deemed it warm enough — usually in early April — so they could start gardening. They installed a kidney-shaped iris garden near the porch, and a large garden near the barn which included raspberry bushes, vegetables, and flowers. The raspberries were especially important to them since during the hard days of the Depression when they’d lived in New York City they’d dreamed of being able to grow and eat raspberries.

My grandmother would get up early to “beat the birds to the berries,” and lay the damp, ripe red raspberries she’d picked on cookie sheets to dry on card tables at one end of our kitchen. Later in the day they’d be turned into raspberry pies or shortcakes — or, if not perfect, jams, jellies, or syrups for the winter months. Tomatoes were canned. Mint became mint jelly for winter lamb. And, of course, we had fresh flowers all summer, and fresh salads, and vegetables for the table. I helped to some extent by weeding and picking berries and vegetables and stirring sauces and straining jellies, but my mother and grandmother did most of the work. By the time I was old enough to make a major contribution I was assigned to lawn mowing, and by fourteen I had a summer job as well.  But the garden, and its products, were all part of our summers in Maine.

When I had my first home in New Jersey I, too, had a garden. I planted daffodil bulbs in the fall because I loved spring flowers, and I grew vegetables and a few annuals in the summer. I was a single parent, and the vegetables helped with my budget as well as being fun to grow.  The snow peas seldom made it to my stir fries: my daughters ate them off the vines.  I loved that.  Somehow, despite working full-time and studying for my doctoral comps, I remember canning tomatoes until the wee hours of the night (or morning,) and being proud of the line of canned tomatoes and tomato sauce on the shelves lining the steps to our basement.

One year a lot of tomatoes ripened just as we were to leave for our Maine vacation. Not wanting to lose that fruit, I packed two grocery bags full of ripe or near-ripe tomatoes, put them on the passenger seat next to me, the children in the back seat, and headed north. I figured I’d make tomato sauce in Maine.

It was a hot July day. As we drove through New Jersey and New York traffic, the tomatoes kept ripening. And, as I took a sharp right exit  turn onto the Merritt Parkway in Connecticut … both bags of tomatoes fell.  Sideways.  Onto me.

To shrieks of delight from my daughters, I found myself driving the remaining six hours to Maine covered with smashed, ripe tomatoes. In our family, that turn will forever be known as “the tomato turn.”

It turned out that was my last garden. I moved again, to a larger house, when my family grew, but although I started a garden there, nothing grew. We were on a hill, and there was little topsoil.

The lawn was mostly moss, and even my daffodils didn’t grow, although every year I persistently planted more bulbs.

So when I finally was able to move to Maine full-time, I knew one thing I wanted to do was bring back the gardens. They had long since disappeared; there’d been no one to take care of them since my grandparents died so, gradually, they’d been taken over by lawn. I hired someone with a tractor and started again. I planted vegetables, and flowers. That first year I was busy, writing, and taking care of my mother, and didn’t give the garden the care it needed. The flowers survived to some extent. The vegetables provided fodder for various types of insects and the local woodchuck. But I discovered, to my delight, that the violets and johnny jump-ups that my grandmother had loved appeared, as though by magic, in the places she had planted them, so many years before.

And in the fall I planted daffodils.

And they bloomed in the spring. 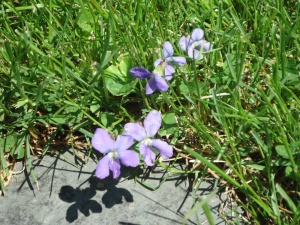 Violets Along the Path

I soon realized my writing and my family were more important to me than my garden so it, too, is now gone; all that is left now is the slate path I laid that first year. The daffodils delight me every spring, and I add to them regularly.

But every year, near that slate path in the grass, the violets come back, reminding me that my grandmother lived her dream here, in this house; in this yard. She wanted a garden, with raspberries. And she made that happen.

I, too, had a dream. I wanted to write. And I’m making that happen. Her violets are here as witnesses. I don’t think she’d be disappointed that I haven’t continued her garden. I think she’d like that this house is still a place where dreams come true.

I write mysteries - the Mainely Needlepoint, Shadows Antique Print and, coming in June of 2018, the Maine Murder mysteries (under the name Cornelia Kidd.) When I was single I was an adoption advocate and adopted my four daughters. Now my mysteries and novels for young people are about people searching for love, acceptance, and a place to call home. My website is http://www.leawait.com To be on my mailing list, send me a note at leawait@roadrunner.com
View all posts by Lea Wait →
This entry was posted in Lea's Posts, Uncategorized and tagged daffodils, dreaming, gardening. Bookmark the permalink.

8 Responses to Different Ways to Garden