Over the long President’s Day weekend, I tackled a job I’d been putting off for far too long—weeding my reference book shelves. Over many years of writing historical novels set in sixteenth-century England, I’ve accumulated hundreds of books to use in my research. With the advent of online used bookstores, it was very easy to locate older titles. Amazon.com made it equally easy to find new biographies and works of social history. Best of all, I was able to take a tax deduction for the legitimate business expense of buying books for research. I bought a lot of books.

The downside is that the shelves in my office are weighed down with hefty tomes. Yes, they still are, but I was able to identify eighty titles I no longer have a use for. A few were just bad decisions on my part—they didn’t contain the information I hoped they would. Some were useful, but since I’ve already used the nuggets I found in them, there’s no reason to hold onto them. Others were purchased when I was working on one particular novel and I know I won’t be revisiting that aspect of sixteenth-century life again. I bought several books on sixteenth-century Russia, for example, as part of my research for Murder in the Queen’s Wardrobe, and I no longer need to keep them. 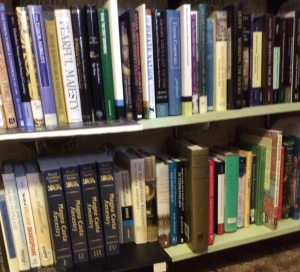 So, there I was with eighty books, many of them fairly specialized. They aren’t the kind of thing the local library, or even the local college library wants as donations. Ditto nursing homes, prisons, and so forth, that might work for novels. Amazon.com now charges sellers a monthly fee to list books on Amazon Marketplace. (Add your own expletives here!). I tried plugging ISBNs into a couple of buy-back bookstores (ABE Books and Cash4Books) and they both responded by saying they weren’t buying that title at this time. Other older books don’t even have ISBNs.

Hmm, I thought. What now? I’m not about to take these books, many of them like new if you don’t count the sections I highlighted, to the dump. There are Maine libraries that might want them, and I know I can count on fellow Maine Crime Writer and retired librarian John Clark to help me reach out to them, but for right now I’m trying out a solution that could find homes for them with individuals who share my somewhat odd interests. 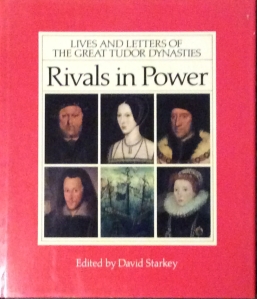 To start with, I made a list of titles, alphabetical by author, added the condition of each one, and saved the doc file as a webpage. After tinkering a bit to make it look better in that format, I uploaded it as http://www.kathylynnemerson.com/ResearchBooksGiveaway.htm What this offers is to give away these books. All I ask in return is to be reimbursed for postage and (if necessary) any box or mailer I might have to buy to accommodate an oddly sized book.

Step two was to post that link on my Kaitlyn Dunnett Facebook page, and especially to the “A Who’s Who of Tudor Women” page that’s attached to it. I haven’t yet publicized it at the Who’s Who website (http://www.tudorwomen.com/ ) but that’s probably the next step . . . right after writing about it here. I’m a little slow at following through on all the things I could be doing, but so far I’m absolutely delighted with the response I got from just the Facebook post. In the first seven days, twenty-three of the eighty titles were adopted. In addition to finding homes for some of the books, I’ve also made some new friends. We obviously have interests in common. The only snag so far has been discovering that it would cost around $100 to ship a box of books to England. The interested party decided against adopting those titles, but we went on to chat by email about the book she’s writing about a sixteenth-century ancestor. Fascinating subject! 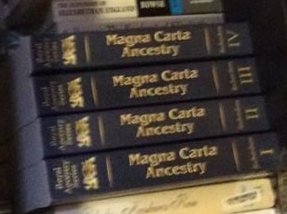 Over to you, dear readers. Do you know any individual or institution with an interest in books like these? If so I’d appreciate it if you’d let them know about the giveaway. And if you have ideas of your own for finding good homes for gently used reference books on any topic, please share in the comments section. And of course, if there’s a book on my list that you’d like for yourself, you have only to let me know.

Depending on how this experiment goes, I may do some more weeding in the not too distant future, in biographies of sixteenth-century people in particular. Those currently fill two six-foot long shelves in my office to capacity.