Posted on February 22, 2018 by jenbloodauthor

As I write this, Magnus the Cat is in the next room attacking the contents of my closet. I’m not entirely sure what’s in there, but whatever it is, by the sound of things it will be all over the floor by the time I’m done here. There’s no question that Marji the Pup loves hijinks, but Magnus definitely is no slouch in that department. They make a winning team.

Meanwhile, I’m in the throes of eleventh-hour preparations of my eighth novel, the second in my Flint K-9 Search and Rescue series. The novel (titled Inside the Echo, to be released this coming Tuesday, February 27) follows K-9 handler Jamie Flint and her team – both human and canine – as they search for a group that’s mysteriously vanished during a dog sledding expedition for battered women in Maine’s Mahoosuc Mountains. When the authorities learn that a rogue gunman was at the heart of the disappearance, the question turns to which abusive partner is behind the violence. Jamie Flint, herself a survivor of domestic abuse, is haunted by memories of her own experiences as she and her dog, Phantom, fight to find the missing women before the shooter does. 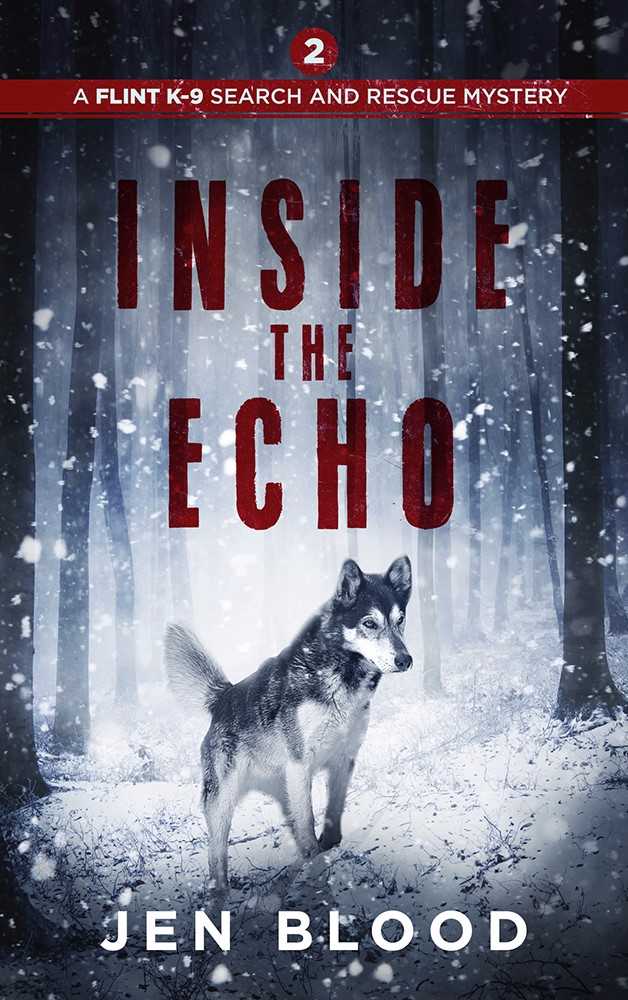 I’ll admit, this has been the toughest novel I’ve written yet. Not just for the content, which has inevitably taken me to some dark places. Beyond that, though, life has changed so much in the past year that finding the energy and the will to visit those dark places isn’t as easy as it once was.

Not so long ago, I lived in an apartment with my mom and my sweet old dog Killian in Cushing. She did the cleaning. I shopped and cooked. And worked as a writer and editor, fourteen hours a day. No guilt. No thought of living a bigger life. Just… y’know. Words. Tons of words. All of them, beautiful fiction. That small, simpler world feels very far away lately.

Without getting into politics too much, I will say that the 2016 presidential election shifted the ground beneath my feet in many ways. I’ve found myself asking more than once whether writing fiction is really where I should be putting my energy. I’m a passionate defender of wildlife and the environment, so the deregulation and gradual dismantling of vital protections that’s transpired over the past year has meant there are daily phone calls to make to local and state representatives; letters to write; petitions to sign; marches to march. What good does fiction do in the grand scheme of things? Should I really be helping people forget reality, when it feels to me like right now that’s the very last thing we can afford to do?

Meanwhile, I’ve gone from that apartment in Cushing with my mom and my sweet old boy Killian, to a whole new world. I have a new house, a relatively new partner, new puppy and cat, and a brooding (but genuinely awesome) fifteen-year-old boy walking our halls whenever he’s on break from the Maine School of Science and Math. It turns out, I quite love all of those things. I love taking care of our old New England farmhouse. I love baking bread and making marmalade, pickling pickles and sewing (I don’t actually have the sewing down yet, but I’m very optimistic), and I can’t wait to get my hands dirty in the garden come spring. In the face of a strange new world, all of these things feel important to me.

When I was thinking about writing this post, I reached out to fellow Maine Crime Writers to ask if there was a time in their lives when they had wavered in their faith in fiction. Had they worried about the impact of putting more violence into an already-too-violent world? I got some wonderful encouragement back, and particularly loved the response I received from Kate Flora:

“As for the fact that we write violence–yes, we do–but we tend to write in genres where good triumphs over evil and the moral order is restored. I’ll never forget the night Hallie Ephron came to her launch party for a book that was published right at the time of 9/11. She’d just been doing a TV interview where the interviewer asked her…didn’t she feel guilty at such a time, profiting from violence and death. Hallie’s response was perfect–she said we should all wish the real world was more like fiction, where the bad guys get caught and moral order is restored to the world.”

Upon much reflection, I think Kate (and Hallie) are right: it’s important to not only be able to escape to a world where good triumphs over evil, but to maybe even inspire some hope that the same is attainable in life. I’ll continue to call my senators and representatives every day, to remind them where I’m at and that – whether they believe it or not – they still work for me. I’ll march, I’ll write, I’ll keep on top of the news.

And then, I will write my fiction.

Jamie Flint is a strong single mom running a successful business of her own, who just happened to be the victim of an abusive partner at one time. That doesn’t define her, though – it doesn’t even define this novel, at least not completely. There’s also a brewing romance, some great character interaction, adventure and twists and nail-shredding suspense. There’s a ghostly edge, and tons and tons of quality dogged-ness. There’s a lower body count in this novel than in any I’ve done before, and ultimately I think the perspective I’ve gained over the past couple of years means added depth to both my characters and my content.

I still worry about whether I’m doing enough to make a difference in the world right now. I’m not sure that’s going away anytime soon. Ultimately, though, I’ve been a writer for as long as I can remember. It’s both a tool of escape for me, and one of understanding. I hope it can be the same for my readers.

Jen Blood is the USA Today-bestselling author of the Erin Solomon Mysteries and the Flint K-9 Search and Rescue series. Her latest novel, Inside the Echo, is out February 27.