The Joys and Pitfalls of Rereading Old Favorites

Posted on November 2, 2017 by kaitlynkathy 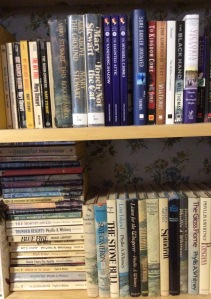 part of one keeper shelf

Kaitlyn Dunnett/Kathy Lynn Emerson here, today musing about rereading books. With so many new titles coming out every year, it’s always possible to find something new to read. Even if I limit myself to new books by authors I’ve read before, I have plenty of choices. But there are times when going back to a book I’ve already read is more appealing. Sometimes the mention of a title or an author in a news story or blog or conversation rekindles my interest. Other times I’m simply in the mood to revisit the fictional world of a specific book or series of books—comfort reads, if you will. Like most readers, I have keeper shelves full of books. I may never read some of them again, but can’t bear to get rid of them either. Some are paperbacks with print so small that I really can’t read them again, but I hang onto them anyway . . . and sometimes buy the ebook version for my iPad. 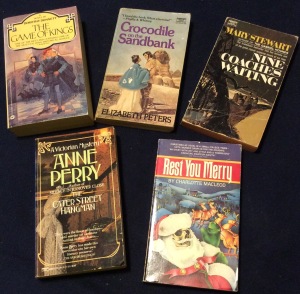 the print is too small to read on these treasures

I won’t say I’ve never been disappointed in a reread. Writing styles change and some of the suspense novels I loved when I was younger seem terribly slow paced to me now. I’ve been trying to reread Mary Stewart’s Nine Coaches Waiting, which I remember as being thrilling, and have had a hard time getting into it because, frankly, nothing happens. When I finally got to the point where the heroine arrives at the house where she is to be employed, I found myself not much caring what happened next. On the other hand, I’ve listened to the audiobook version of Stewart’s Touch Not the Cat a number of times and always enjoy it. 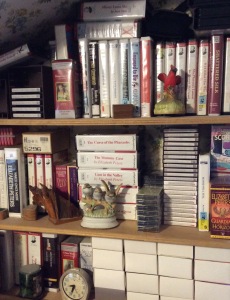 Speaking of audiobooks, I have to confess that I’m a dinosaur in this area. My car is old enough that it came with a cassette player. Thankfully, I can still find audiocassette editions online, and since I prefer to listen to books I’ve already read, I’ve amassed quite a nice little collection of (mostly) mysteries. Now that no one puts books on cassette tapes anymore, they are, by definition, oldies but goodies. I “reread” Elizabeth Peters, Carolyn G. Hart, Dorothy Dunnett, J. D. Robb, and others this way. Barbara Rosenblatt is my all-time favorite among audiobook narrators. I’ve just finished listening to Crocodile on the Sandbank for the fourth or fifth time and have moved on to The Curse of the Pharaohs. It doesn’t bother me at all that I know the plots. It’s the being read to that’s appealing.

That said, with most of the books I reread, it’s been long enough since the previous read that I’ve forgotten the details. I definitely don’t remember who dunnit. Just recently, I took Margaret Maron’s Bootlegger’s Daughter off my keeper shelf and was shocked to realize that it came out twenty-five years ago. It had been that long since I’d read it, too. I read all the books in the series as they came out, including the final entry just a year or so ago and I have a couple of them on audiocassettes, but I’d never gone back and reread the series from the beginning. Now I am, and they’re terrific reads, although I remembered them as being less dark. That could just be because I read more in the cozy genre these days than I used to. Anyway, I’m now up to number four, Up Jumps the Devil.

Every once in awhile I go even farther back in my past to a book I remember reading as a kid. Some hold up. Some don’t. I was delighted to find that The Lark Shall Sing by Elizabeth Cadell, a book I read and loved as a teenager (I still have the falling apart paperback edition, under the title The Singing Heart) had been reissued as an ebook, and that there were two more in the series that I’d not been aware of.  I promptly downloaded all three. The original was just as wonderful as I remembered. The second was enjoyable. I couldn’t get through the third. 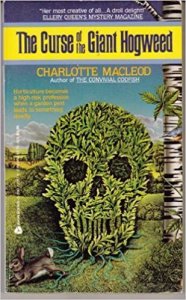 In the past, I’ve binge read quite a number of series, everything from Dorothy Dunnett’s historical Lymond Chronicles to Carola Dunn’s cozy Daisy Dalrymple series and Charlaine Harris’s paranormal books featuring Sookie Stackhouse. When they finally came out as ebooks, I reread all of Charlotte MacLeod’s fun and funny mysteries. The only one I couldn’t get through was Curse of the Giant Hogweed, and if I remember correctly, I had trouble with that one the first time around. 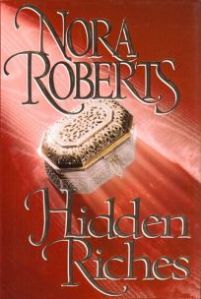 For those of you who read romance, you know that there are lots of trilogies and multi-book series featuring siblings or characters bound together by some other shared experience. In the historical romance arena, I’ve done multiple rereads of Jo Beverly’s Company of Rogues, and her Mallorens, too, and of Mary Jo Putney’s Fallen Angels series, and Kasey Michaels’ Beckets of Romney Marsh. Among my favorite single-title romance rereads are Heather Graham’s Dante’s Daughter (to be read during football season for maximum enjoyment), Nora Roberts’ Hidden Treasures, and Susan Sizemore’s time travel, Wings of the Storm.

So what about you? What books do you go back to when you are in the mood for something familiar?

Kathy Lynn Emerson/Kaitlyn Dunnett is the author of more than fifty traditionally published books written under several names. She won the Agatha Award and was an Anthony and Macavity finalist for best mystery nonfiction of 2008 for How to Write Killer Historical Mysteries and was an Agatha Award finalist in 2015 in the best mystery short story category. She was the Malice Domestic Guest of Honor in 2014. Currently she writes the contemporary Liss MacCrimmon Mysteries and the “Deadly Edits” series (Crime and Punctuation—2018) as Kaitlyn and the historical Mistress Jaffrey Mysteries (Murder in a Cornish Alehouse) as Kathy. The latter series is a spin-off from her earlier “Face Down” mysteries and is set in Elizabethan England. New in 2017 is a collection of short stories, Different Times, Different Crimes. Her websites are www.KaitlynDunnett.com and www.KathyLynnEmerson.com

9 Responses to The Joys and Pitfalls of Rereading Old Favorites