Kaitlyn Dunnett/Kathy Lynn Emerson here, again writing as Kathy. One of the most important people in my life when I was little was Grandma Coburg. She died when I was only ten, but even at that age I knew how important her home (affectionately called “the farm” by everyone in the family) was to her. We once took her and my grandfather house-hunting. I saw how traumatic that was for her, but I didn’t understand why until much later. Neither did I quite get why she was “Grandma” to me but my mother called her “Aunt Katie.”

In a nutshell, my mother’s father married two sisters. The first died giving birth to my mother in 1910. More than twenty years passed before the second marriage took place. It would have happened much sooner except for one thing—those two sisters had a formidable mother, and she blamed my grandfather for the death of her favorite daughter. It was only a couple of years ago, when I was looking at random documents on Ancestry.com, that I understood a bit more about why that was. It seems that first marriage didn’t take place until a few months before my mother’s birth. And, of course, Grampa Coburg was a trainman, gone a lot of the time working for the O& W Railroad. 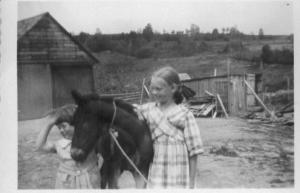 Back when Mom was still alive and I was writing children’s books, I asked her a lot of questions about growing up on the farm and her . . . let’s say quirky . . . family. She was raised by her grandparents and Aunt Katie in a farm/boardinghouse in the days when the Sullivan County Catskill region of New York State was just beginning to be known as the Borscht Belt. During every summer Season, every room in the house, and in the “addition” built on for that purpose, was rented out to people from New York City. Mom, her cousins, grandmother, and aunts moved into the attic; the uncles and her father, when he was there, bunked in the barn, and her grandfather put a mattress on top of the piano in the big dining room and slept there at night. 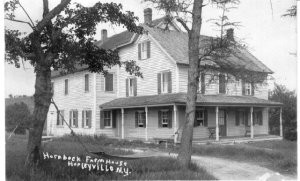 I had lots of real family stories to go on when I set out to write what was originally called Boarding House Reach, but what I really wanted was to rewrite history and give the couple I knew as my grandparents a much easier time of it. The story went through lots of versions over the years. One critique thought its biggest flaw was having too many adult characters, but that was kind of the point. I wanted my young heroine, age twelve in 1922, to be both rebel and mediator when it came to the members of her family. And also, like my mother, and like me, for that matter, she had to be an only child used to getting her own way except when it mattered most.

I took me more than thirty years to get this story right. In any year but this one, I might not have done any more than that, but 2020 lent itself to making a bucket list, and getting this story out into the world was on it. I decided to self-publish and it is now available as both an e-book and a print-on-demand paperback. Along the way, my twelve-year-old protagonist’s name changed to Katie (her aunt became Mattie) and Katie’s Way was born.

Memory, family history, and imagination all played a part in creating Katie’s Way. You can read about some of the true stuff here but I hope that those of you who have children or grandchildren aged 8-12, or young friends in that age group, will also consider that my fictional version of events would make a great Christmas present. Links to buy this book and my other books for young readers can be found here

Kathy Lynn Emerson/Kaitlyn Dunnett has had sixty-three books traditionally published and has self published several children’s books. She won the Agatha Award and was an Anthony and Macavity finalist for best mystery nonfiction of 2008 for How to Write Killer Historical Mysteries and was an Agatha Award finalist in 2015 in the best mystery short story category. She was the Malice Domestic Guest of Honor in 2014. Currently she writes the contemporary “Deadly Edits” series (A Fatal Fiction) as Kaitlyn. As Kathy, her most recent book is a standalone historical mystery, The Finder of Lost Things. She maintains websites at www.KaitlynDunnett.com and www.KathyLynnEmerson.com. A third, at A Who’s Who of Tudor Women, is the gateway to over 2300 mini-biographies of sixteenth-century Englishwomen.

6 Responses to Rewriting My Family History