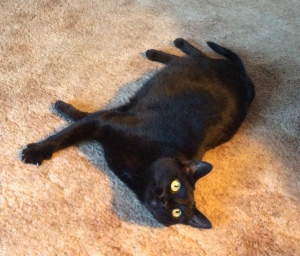 Kaitlyn Dunnett/Kathy Lynn Emerson here. It’s been about six months since my last update on Shadow (https://mainecrimewriters.com/2019/09/03/an-update-on-shadow-lea-waits-cat/),who came to live with us last August. It was an adjustment for me and for my husband. We were used to cats who loved to cuddle (Maine Coons, mostly). Shadow, apparently, was never fond of being held. It was also a big adjustment for her. She’d had a pretty rough couple of years. Not only did she lose first one and then the other of her humans, she also ended up being left alone for long stretches. Someone came in to check on her and make sure she had food and water and a clean litter box, but when your regular person is frequently in the hospital, and occasionally has to make writing-related business trips as well, it takes a toll. All in all, we knew it would take a while for her to settle in.

Slowly, she’s warming up to us. I can pick her up without sending her into a frenzy trying to bite and scratch, and even hug her (a little). She allows herself to be stroked, when she’s in the mood, and warns us when she’s had enough with a little yip before the claws come out. Twice now, she’s pushed her way under the covers on a cold night and curled up between us to sleep for a while. 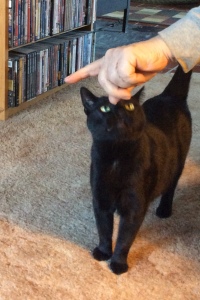 Shadow obeying the order to look over there.

She still fights any attempt to clip her claws, and does not know the meaning of “no, no, bad kitty!” when it comes to scratching anything other than her scratching post, but she’s better about using “velvet paws” when she just wants to play. She has several times raced after me as I was walking away from her, whacked me on the backs of my legs, and taken off again a warp speed. I assume this is a game, but I’m still not certain of the rules.

Shadow exhibits typical feline behavior in many ways. She’s determined to get out onto the screen porch until she realizes it’s freezing out there. She has a habit of getting locked in the clothes closet because she streaked in there without anyone noticing. And she immediately jumps into any box or bag she happens to find. She particularly likes the grocery bag that lines my paper recycling bin, especially when it has just been changed and has only a few post-its inside.

She also has some distinct quirks not found in any of the many other cats who have shared our home over the years. She doesn’t drink water. Not out of her bowl. Not out of the sink. She’s not dehydrated, but I’ve been making “gravy” by adding water to her food to make sure of that. The one time I thought she was trying to lick water off the side of the sink, it turned out she was eating a blob of toothpaste I’d missed wiping up. She seemed to like it. 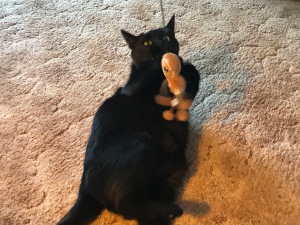 Shadow with her favorite toy

These last months have been a learning experience for Shadow. Because she lived upstairs with Lea and Bob (to separate her from his studio and paintings downstairs), the refrigerator, the stove, and the wood stove were entirely new to her. Because their house was on a quiet street, the constant traffic, including pulp trucks, passing by our place on U.S. Rt. 2, meant all kinds of noises spooked her. She wasn’t used to other animals, either. We don’t have any other cats at the moment, but when a neighborhood cat dared come up to the outside of the sliding glass door to our back deck and look in at her, the result was a solid fifteen minutes of hissing and howling. We didn’t know Shadow could make sounds like those.

All in all, I think we’re making good progress. Just this past week, she’s started curling up in my usual place on the loveseat in the living room (when I’m not there, of course) and one of those times she let me sit down next to her without immediately bolting. I was even allowed to pet her without damage to life or limb.

With the January 2020 publication of A View to a Kilt, Kathy Lynn Emerson/Kaitlyn Dunnett will have had sixty-one books traditionally published. She won the Agatha Award and was an Anthony and Macavity finalist for best mystery nonfiction of 2008 for How to Write Killer Historical Mysteries and was an Agatha Award finalist in 2015 in the best mystery short story category. She was the Malice Domestic Guest of Honor in 2014. Currently she writes the contemporary Liss MacCrimmon Mysteries and the “Deadly Edits” series as Kaitlyn. Next up is A Fatal Fiction, in stores at the end of June. As Kathy, her most recent book is a collection of short stories, Different Times, Different Crimes but there is a new, standalone historical mystery, The Finder of Lost Things, in the pipeline for October. She maintains three websites, at www.KaitlynDunnett.com and www.KathyLynnEmerson.com and another, comprised of over 2000 mini-biographies of sixteenth-century English women, at A Who’s Who of Tudor Women.

13 Responses to Life With Shadow