Give Every Character a Secret 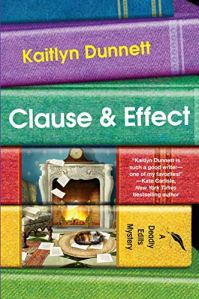 Kaitlyn Dunnett/Kathy Lynn Emerson here, working on the rough draft, otherwise known as first draft, s**t draft, or “throw in everything, including the kitchen sink” draft, of the third “Deadly Edits” mystery. This is always the most challenging stage of writing for me, since I lack the ability to think very far ahead in the story. Believe me, I would love to be able to outline the plot in advance, but I’ve learned over the years that it’s far less time consuming to simply sit down and write the book. I’ll worry about making sense of it all when I revise. That’s also when I’ll make an outline. It’s soooo much easier after the fact!

What do I know in advance? I usually know who gets murdered, why, and who dunnit. I will also have given some thought to alternate suspects and their motives, and have come up with a reason why my amateur sleuth should get involved in solving the crime. She has to have a good reason, at least in her own mind.

I also try to follow a bit of good advice I first heard when I was a newbie: give every character a secret. At the time I was writing for ages 8-12, but this is one rule that works in writing books for any age group. The secrets don’t have to be big ones, just important enough to keep. The suspicion that people are hiding something is a wonderful way to complicate the plot. It may even provide an entire subplot for the novel.

The real killer is keeping at least a couple of big secrets—the murder itself and the reason behind it. Other characters may have committed some less serious crime or may not have done anything wrong at all. Some secrets may be very minor indeed. The important thing is that keeping them quiet matters. In one of my children’s mysteries, the protagonist’s mother is a college professor on sabbatical. Her secret is that she’s using her time away from academia to fulfill a lifelong dream—she’s writing a romance novel. She was wise to keep this to herself. One reviewer questioned her choice, wondering why, of all things, it had to be a romance. That pretty much made my point. 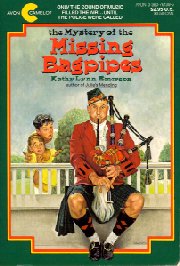 I still have some early character notes for my second mystery for ages 8-12, The Mystery of the Missing Bagpipes. I admit the premise is a bit of a stretch—a group of bagpipe enthusiasts gather at a campground in Maine to take classes and study the history of the instrument—but I was writing at a time when my husband was in a bagpipe band and spending most weekends marching in parades. The conventional wisdom is to write about what you know, right? Anyway, in this novel, the pipers have their families with them. Each of my character sheets contains information on age, hair color, eye color, height, build, and special skills, but there are also lines labeled “secret” and “reason for keeping secret.” The book opens with my preteen heroine, Kim, declaring she hates the sound of bagpipes. Her secret is that she would really like to learn to play the instrument herself, so that she can share her father’s hobby. Her new friend Shelly’s secret is that she plays the bass drum in her parents’ bagpipe band. She keeps quiet about that because she believes that Kim dislikes everything to do with pipe bands. Shelly doesn’t want to alienate her. Among the adults, the sponsor of the gathering is trying to keep his heart condition quiet. Other characters are trying to hide criminal activities. Kim’s father also has a secret. He’s planning to retire from the NYPD and move to Maine, but he doesn’t want to tell his children until things are settled. Kim’s mother is hiding the fact that she’s house hunting. Kim’s eight-year-old twin siblings don’t want to reveal that they saw someone sneaking around late at night because they were supposed to be sound asleep in bed at the time. Most of these secrets don’t fall into the category of earth-shattering revelations when they come out, but they do complicate the plot and distract my amateur sleuth from solving the crime too soon. 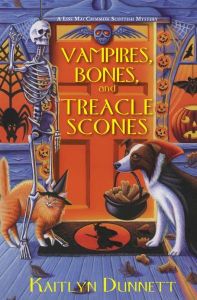 In writing my two current cozy mystery series, I haven’t always given every character a secret in advance, but secrets certainly have a way of cropping up as I fumble my way through the rough draft. In Vampires, Bones, and Treacle Scones, the seventh Liss MacCrimmon Mystery, I introduced a teenage character nicknamed Boxer. He was supposed to be comic relief, delivering malapropisms like “That’s the way the cookie bounces.” I gave him an unwed mother from a local family of n’er-do-wells and a history of being pigeonholed as a kid who’d never make anything of himself. I planned to turn that assumption on its head, but I had no idea until I was actually writing a scene late in the book that he was about to reveal one heck of a secret. The identity of Boxer’s father came as a huge surprise to both Liss and me.

In my WIP, I’ve not only assigned secrets to most of the suspects, but also to my amateur sleuth, Mikki Lincoln. She hasn’t told her late husband’s family (they’re in Maine; she’s now living in New York State) anything about the two previous murder cases she’s been involved in. She didn’t want them to worry. Naturally, this information comes out at the worst possible moment and when her visiting nephew hears the horrifying details, he goes into protective mode. Mikki then has to keep even more secrets from him in order to solve the most recent murder.

There was also a second “rule” I followed when I was writing for middle-grades readers. It was “kill off the parents.” Not always literally, of course, in those innocent days of the 1980s, but think about it: if you want children or teens to solve a crime, they need to be able to do their sleuthing without the adults in their lives hovering over them. In writing cozy mysteries for an adult audience this rule translates into “figure out a way for the amateur sleuth to operate unimpeded by police professionals”. . . but that’s a topic for another blog.

Kathy Lynn Emerson/Kaitlyn Dunnett is the author of nearly sixty traditionally published books written under several names. She won the Agatha Award and was an Anthony and Macavity finalist for best mystery nonfiction of 2008 for How to Write Killer Historical Mysteries and was an Agatha Award finalist in 2015 in the best mystery short story category. She was the Malice Domestic Guest of Honor in 2014. Currently she writes the contemporary Liss MacCrimmon Mysteries (Overkilt) and the “Deadly Edits” series (Crime & Punctuation) as Kaitlyn and the historical Mistress Jaffrey Mysteries (Murder in a Cornish Alehouse) as Kathy. The latter series is a spin-off from her earlier “Face Down” mysteries and is set in Elizabethan England. Her most recent collection of short stories is Different Times, Different Crimes. Her websites are www.KaitlynDunnett.com and www.KathyLynnEmerson.com and she maintains a website about women who lived in England between 1485 and 1603 at www.TudorWomen.com

3 Responses to Give Every Character a Secret