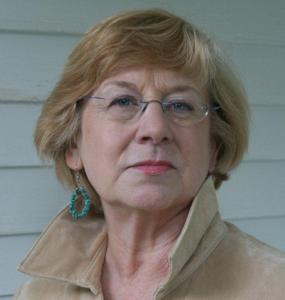 And Happy 2019! Last summer I never thought I’d be saying or writing those words. In case anyone missed the excitement of my health issues, in mid-June of 2018 I was diagnosed with stage 4 pancreatic cancer, metastasized. I wrote about it in a blog here .

I didn’t include that my oncologist had told me I only had four to six weeks to live. But a month later I wrote about what it meant to know you had a short time to live. I’d updated my will and related legal documents after my husband, Bob, had died in April, so all that was in order. I signed a DNR and posted it on my refrigerator – what one does in Maine, and maybe other places.

In late July and early August my daughters all came to see me “to say good-bye.” Most of them choose silver, jewelry, paintings, etc., to “remember me by” and shipped them out. I donated books and reference materials to a museum in Maine, and to several libraries that had supported me over the years. A local used book store bought my collection of mystery books. Bob’s art supplies went to some family members and two Maine community art programs. I tossed out a lot of files, and, most important to me, I self-published two historical novels for young people that my current agent wasn’t interested in selling, and my previous publishers of books for young people didn’t want. 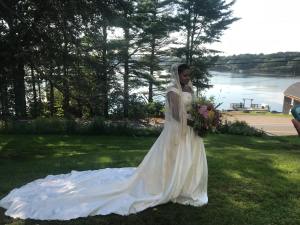 My daughter Liz, who’d been engaged for 16 years, even got married. I remember telling her to move her wedding date a week up, in case I didn’t make it longer. She was married August 9 in the front yard of my home in Maine. 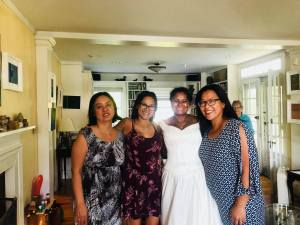 My 4 daughters right after Liz’ wedding. From l-r, Caroline, Ali, Liz, and Becky.

It was a lovely and special day, and a tiny wedding. The wedding gown I’d bought for her 15 years ago still fit, and the groom ordered a tux from E-Bay — and it all worked. (I wrote a blog about it, of course!) 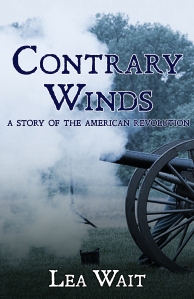 My next hope was that I’d see my two books — CONTRARY WINDS and FOR FREEDOM ALONE — in published form. I did. I bought a wig to wear to appearances, and even made a full-day school visit in September.

When I was still alive in October, my oncologist ordered more scans and — amazing! No; I wasn’t cured. But the cancerous lesions were gone from my liver, where they’d threatened an infection that would kill me quickly, and some pancreatic lesions were also gone. Clearly the doc hadn’t expected that to happen.

Liz was still with me. She got a job in a Maine supermarket and drove me to chemo appointments, did our laundry, and drove me crazy asking me how I was feeling and had It taken my pills? (Although that was all appreciated.) I made a few library appearances, and Skype visits. And in November, with transportation provided by fellow Maine Crime Writers Dick Cass and Bruce Coffin, I went to Crime Bake in Massachusetts and moderated a panel. My agent asked me which book I was going to finish next. (I have two under contract.) We decided on the next Mainely Needlepoint book — the ninth in the series.

Two of my other daughters decided to join me for Christmas “the way we celebrated when we were growing up.”  That meant I spent December using the strength I had to bake cookies and pies and muffins, and then had a party Christmas Eve and food Christmas Day. I didn’t get much writing done in December. But we had Christmas in Maine.

By New Year’s all of my daughter had returned to their homes. The editor of the Mainely Needlepoint series called to say the manuscript I was working on (THREAD AND

BURIED) was scheduled for publication in October of 2019, the cover was done, and all other books scheduled to be published that day were in production. Could he have the manuscript by February 1? Optimistically, I took a deep breath and told him I’d try.

It took several days to take down Christmas decorations (a neighbor and his daughter took the tree out) and then I got to work. I wrote about 70 pages before I started to have pains — not pains connected to my pancreas or liver, though. I figured “no big deal,” although I was exhausted, couldn’t write more than a page or so, and started taking pain meds. After a few days of serious pain, I called my doctor, went in to see him, and was told I had a kidney infection. Messed up immune systems are part of this whole chemo deal.  So I went on heavy antibiotics, and rested more. (Couldn’t do much else.)  I lost almost 2 weeks of writing.

January 16, almost exactly seven moths after I’d been diagnosed, and having been off chemo for 6 weeks, I went back for more scans — and the results were the same as October. In other words — good. I was still dying, but the process was much slower than originally thought. I started chemo again. I also started acupuncture, to help with the neuropathy that was challenging my walking and typing.

So — I’m still here! My editor will not have my full manuscript February 1; he’s extended my deadline to March 1, or ASAP, and moved my publication date out. Frankly, he doesn’t have much choice. I’ve also started the process to self-publish my one remaining “finished but never published” manuscript: an adult mystery set in 1865 New York State, JUSTICE & MERCY. I hope it’ll be available in March. And my next Needlepoint mystery, THREAD ON ARRVAL, will ship April 30. It’s all set, and may be pre-ordered.

So, now you know all that’s been happening. And, the bottom line is still clear.

I’m still here. And, slowly but surely,  I’m writing on.

I write mysteries - the Mainely Needlepoint, Shadows Antique Print and, coming in June of 2018, the Maine Murder mysteries (under the name Cornelia Kidd.) When I was single I was an adoption advocate and adopted my four daughters. Now my mysteries and novels for young people are about people searching for love, acceptance, and a place to call home. My website is http://www.leawait.com To be on my mailing list, send me a note at leawait@roadrunner.com
View all posts by Lea Wait →
This entry was posted in Lea's Posts, Uncategorized and tagged Contrary Winds, For freedom Alone, Lea Wait, pancreatic cancer, Thread and Buried, Thread on Arrival. Bookmark the permalink.