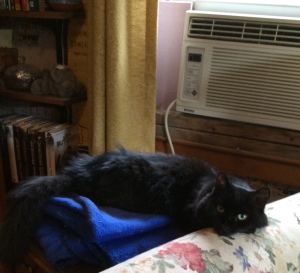 Kaitlyn Dunnett/Kathy Lynn Emerson here, writing this on August 10, the first relatively cool day we’ve had in weeks. More heat and humidity are due in next week, when this blog will actually appear. Let me just say . . . yuck!

I like living in Maine precisely because we don’t usually have more than a handful of hot, humid days each year. 2018 has already broken the record. DO NOT tell me climate change is a hoax. It’s pretty obvious something untoward is going on with the heat index.

We have window units in three rooms—the living room, the bedroom, and my office. Air conditioners work pretty well for controlling how hot it gets in the house, but the humidity is another matter. Did I mention I hate to sweat? Worse, my brain doesn’t work properly when the weather is steamy. It’s a good thing the current manuscript (the one set in March) is in a “resting” stage, because I doubt I’d have produced anything readable in this weather. 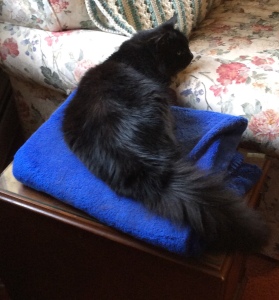 I visited New Orleans once, back in the 1990s, in the summer, for a RWA conference. It’s an interesting city, but the humidity nearly killed me every time I went outside the hotel. Drinking hurricanes helped, but only up to a point. I did make a successful pitch to my editor at the time (for the book that became Echoes and Illusions), but my most vivid memory of those few days is of being profoundly uncomfortable.

Our recent heat wave has been on a par with that experience, only it’s lasted longer (23 days and counting). Here in western Maine a lot of places aren’t air conditioned at all. The heat builds up inside during the day and it doesn’t have anywhere to go at night. Forget sleeping well if you don’t have something to help cool things off. Even in air-conditioned buildings, energy savers cut in and out, making you sweat just before you get another blast of cold air. The end result is a lot of cranky people.

Animals aren’t happy either. I took pictures of Bala for International Cat Day (August 8). She wasn’t about to move, let alone be cute for the camera. Maybe cats have the right idea—sleep until things improve.

Kathy Lynn Emerson/Kaitlyn Dunnett is the author of nearly sixty traditionally published books written under several names. She won the Agatha Award and was an Anthony and Macavity finalist for best mystery nonfiction of 2008 for How to Write Killer Historical Mysteries and was an Agatha Award finalist in 2015 in the best mystery short story category. She was the Malice Domestic Guest of Honor in 2014. Currently she writes the contemporary Liss MacCrimmon Mysteries (Overkilt—November 2018) and the “Deadly Edits” series (Crime & Punctuation) as Kaitlyn and the historical Mistress Jaffrey Mysteries (Murder in a Cornish Alehouse) as Kathy. The latter series is a spin-off from her earlier “Face Down” mysteries and is set in Elizabethan England. Her most recent collection of short stories is Different Times, Different Crimes. Her websites are www.KaitlynDunnett.com and www.KathyLynnEmerson.com and she maintains a website about women who lived in England between 1485 and 1603 at www.TudorWomen.com

13 Responses to Too Darn Hot