The Wonderful World of Fairy Tales

Posted on January 2, 2018 by kaitlynkathy

Kaitlyn Dunnett/Kathy Lynn Emerson here, musing today about fairy tales. It was a news item about the first performance of Peter Pan, way back in 1904, that started me pondering this topic, even though I don’t ordinarily think of Barrie’s stage play (in any of its incarnations) as being in the same genre as stories by Hans Christian Andersen or the Brothers Grimm. For one thing, the original versions of most classic fairy tales are short narratives without much dialogue or a lot of description—more akin to tales told around a campfire than to lavish theatrical productions or animated feature films.

I still have the book of Grimm’s Fairy Tales I was given as a child. I was especially fond of “Jorinda and Jorindel,” “Cat-skin,” “Ashputtel,” and “King Grisly-Beard.” “Hansel and Grettel” not so much. Fairy tales are not for the fainthearted. People meet grisly fates in many of them, some deserved and some not.

My all-time favorite fairy tale has always been “The Twelve Dancing Princesses,” in part because it does (sort of) have a happy ending, and in part because of the dancing. One year when I was a teenager it was the basis of our annual ballet recital. As the tallest girl in the advanced class, and the only one who did not take toe lessons, I played the prince. I even got to name him, since he doesn’t have a name in the original story. I chose Basil. Why? No idea. I was just happy the part was to be that of a prince, because in some versions of the story he’s an old soldier instead. It was a cool role to undertake. Not only did I get to do a lot of big leaps and spins and some pantomime, but I also had a magic cloak that made me invisible. 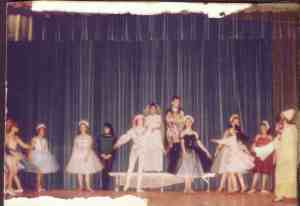 There’s no way to write about this topic without the name Disney coming into the conversation. I admit I have always had a soft spot for Disney versions. Peter Pan was a favorite, even though I liked the live Mary Martin performance on television much better. I can remember sitting through Disney’s Sleeping Beauty numerous times at the movie theater, and Disney’s Cinderella has always appealed to me more than the various theatrical interpretations. Once upon a time, I owned my very own Snow White doll, complete with seven plastic dwarfs.

And then, of course, there’s Into the Woods. I’ve seen it on stage and in two filmed versions. I’m not certain what the appeal is. It’s certainly not an upbeat musical and thinking about it reminds me of a song Peter, Paul, and Mary recorded many years ago. In the patter that goes along with it, they explain that “Blue” has all three basic elements of children’s songs. These work just as well for fairy tales. One is simplicity, so the child can understand it. Two is pathos, to prepare the child for later traumatic experiences. Three is repetition, to give the child a false sense of security.

By now you’re probably asking yourself where the heck I’m going with this post. Darned if I know. Let’s call it a stream of consciousness blog. This can happen when a blogger can’t come up with any other idea and a deadline is looming. But now that I’ve rambled on about fairy tales, I am curious. What role did fairy tales play in your life? Do you think they still have a place in this big bad world? And if you choose to read or tell a fairy tale to a child or grandchild or niece or nephew, are you more likely to pick the grim Grimm version or the fluffy Disney interpretation?

2 Responses to The Wonderful World of Fairy Tales